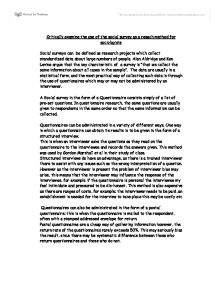 Critically examine the use of social surveys as research method

Social surveys can  be defined as research projects which collect standardized data about large numbers of people. Alan Aldridge and Ken Levine argue that the key charcteristic of  a survey is “that we collect the same information about all cases in the sample”.  The data are usually in a statistical form, and the most practical way of collecting such data is through the use of questionaires which may or may not be administered by an interviewer.

A Social survey in the form of a Questionnaire consists simply of a list of pre-set questions. In questionnaire research, the same questions are usually given to respondents in the same order so that the same information can be collected.

Questionnaires can be administrated in a variety of different ways. One way in which a questionnaire can obtain its results is to be given in the form of a structured interview.

This is when an interviewer asks the questions as they read on the questionnaire to the interviewee and records the answers given. This method was used by Gordon Marshall et al in their study of class.

Structured interviews do have an advantage, as there is a trained interviewer there to assist with any issues such as the wrong interpretation of a question.

Questionnaires can also be administrated in the form of a postal questionnaire; this is when the questionnaire is mailed to the respondent, often with a stamped addressed envelope for return.

Questionnaires can be administrated to groups e.g. a class of students. This method is an adaptation of structured interviews as it still has the advantage of the interviewer being present although the interviewer must be careful that the respondents do not talk about the questions and influence each other’s answers.

Telephone questionnaires is another way of administrating questionnaire This is obviously the interviewer asks the interviewee questions over the telephone, this form is often done for marketing purposes but it is not considered satisfactory by sociologists. As Aldridge and Ken Levine point out, it is hard to establish rapport in such interviews. The response rate for this type of questionnaire is extremely low as many people relate the to marketing so are unwilling to cooperate.

Another possibility is to send a questionnaire via e-mail. However, this option has the same disadvantages as telephone questionnaires although this method offers the use of visual aids.

Questionnaires tend to be used to produce quantitative data. Often the researcher will ask a variety of questions on a topic, as they do not have set hypotheses. However, they must have an idea of what factors are of what importance before they construct the questionnaire.

Whilst using questions researchers have to operationalise concepts. This means they have to make the concept understandable to all respondents to make it possible measure the results correctly.

First an operational definition is established, this involves breaking down the concept into components and dimensions in order to specify exactly what is to be measured. For example, when Robert Blauner attempted to operationalise the concept of alienation he divided it into four components- powerlessness, meaninglessness, isolation and self-estrangement. In addition, like Gordon Marshall et al work, when they tried to operationalise the concept of class, they had to adopt definitions of class categories used by E.O. Wright and John Goldthorpe.

The next step involves a selection of indicators for each component. For example, an indicator Blauner’s component of powerlessness might be an absence of opportunities of workers to make decisions about the organisations of work tasks. Similarly, Marshall et al selected indicators of class concisenesses such as attitudes to social inequality and towards industrial conflict.

Indicators of each dimension then need to be put into a form so that all respondents can understand so the results can be quantified. E.g., Blauner’s indicators of conscientiousness became questions such as “Do you think the distribution of income and wealth is a fair one?”
And in Marshall et al work, “Do you think there are any important issues that cause conflict between those who run industry and those who work for them.”

Researchers have an important decision in deciding what form of question to ask.

Questions may be open-ended, for example “Under what circumstances do you think a person could move from one class to another?”

Open-end questions allow the respondent to compose their own answers rather than choosing between answers given. This makes the data more likely to be valid, since the respondent can say what they mean in their own words.

However, this kind of response may be difficult to classify and quantify. Answers must be interpreted carefully before the researcher is able to say the definite meaning of the response.

Another kind of question is a closed or fixed question. This requires a choice between a number of given answers. For example the following question was asked to white people in Britain in Modood et al, “If a close relative were to marry a ethnic minority person, most white people would say ‘Would not mind, would mind a little, would mind a lot, cant say.’” A similar type of question under the same heading requires the respondent to agree or disagree.

Such questions often employ a Likert scale, where respondents are given a range of options from “strongly agree to strongly disagree.”

Fixed choice questions provide responses that can be more easily classified and quantified.

However, fixed choice questions do not allow the respondent to qualify and develop their answers. It is therefore difficult for researchers to know what they are measuring.

If open-ended questions are used and the researcher wants, the data to be in a statistical form it become necessary to code the answers. Coding involves identifying a number of categories in which the answers can be placed. The researcher usually examines the answers given and establishes the principal types of answers that have been provided. E.g. “The British crime survey of 1988” The answers to an open ended question as to why people had not reported crimes were put into classifications, such as “too trivial”, “police couldn’t do anything.”

Questionnaire research is certainly a practical way to collect data; they can be used to collect large quantities of data from considerable amount of people over a relatively short period of time. For example, in Gordon et al study of property they used a sample of 1,534 people, while the British crime survey of 2002 used a sample of 37,000. Such large samples cannot be studied using more in-depth research methods without incurring prohibitive costs.

Even when interviewers administrate the questionnaires, this involves relatively little personal involvement, or danger or sacrifice on the part of the researcher, when compared with some PO studies.

Other types of research method, such as unstructured interviewing or observation, would be less suitable for collecting  standardised information about large groups because they would be both time consuming and difficult to translate into  statistical form.