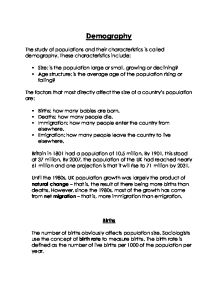 Demography topic revision notes. The study of populations and their characteristics is called demography.

Demography The study of populations and their characteristics is called demography. These characteristics include: * Size: is the population large or small, growing or declining? * Age structure: is the average age of the population rising or falling? The factors that most directly affect the size of a country's population are: * Births: how many babies are born. * Deaths: how many people die. * Immigration: how many people enter the country from elsewhere. * Emigration: how many people leave the country to live elsewhere. Britain in 1801 had a population of 10.5 million. By 1901, this stood at 37 million. By 2007, the population of the UK had reached nearly 61 million and one projection is that it will rise to 71 million by 2031. Until the 1980s, UK population growth was largely the product of natural change - that is, the result of there being more births than deaths. However, since the 1980s, most of the growth has come from net migration - that is, more immigration than emigration. Births The number of births obviously affects population size. Sociologists use the concept of birth rate to measure births. The birth rate is defined as the number of live births per 1000 of the population per year. There has been a long-term decline in the number of births since 1900. In that year, England and Wales had a birth rate of 28.7, but by 2007 it had fallen to an estimated 10.7. However, there have been fluctuations in births, with three 'baby booms' in the 20th century. The first two came after the two world wars (1914-18 and 1939-45), as returning servicemen and their partners started families that they had postponed during the war years. There was a third baby boom in the 1960s, after which the birth rate fell sharply during the 1980s, before falling again after the early 1990s, with a recent increase since 2001. ...read more.

These included improvements in housing (producing drier, better ventilated, less overcrowded accommodation), purer drinking water, laws to combat the adulteration of food and drink, the pasteurisation of milk, and improved sewage disposal methods. Similarly, the Clean Air Acts reduced air pollution, such as the smog that led to 4,000 premature deaths in five days in 1952. Other social changes Other social changes also played a part in reducing the death rate during the 20th century. These included: * The decline of more dangerous manual occupations such as mining * Smaller families reduced the rate of transmission of infection * Greater public knowledge of the causes of illness * Higher incomes, allowing for a healthier lifestyle. Life Expectancy Life expectancy refers to how long on average a person born in a given year can expect to live. As death rates have fallen, so life expectancy has increased. For example: * Males born in England in 1900 could expect on average to live until they were 50 (57 for females). * Males born in England in 2003-5 can expect to live for 76.9 years (81.2 for females). If we take the past two centuries, life expectancy has increased by about two years per decade. One reason for lower average life expectancy in 1900 was the fact that so many infants and children did not survive beyond the early years of life. As we saw earlier, in 1900 over 15% of babies died in their first year. To put the improvement in life expectancy into perspective, we can note that a newborn baby today has a better chance of reaching its 65th birthday than a baby born in 1900 had of reaching its first birthday. Class, gender and regional differences Despite the overall reduction in the death rate and the increase in life expectancy over the last 100 years, there are still important class, g ender and regional differences. ...read more.

The dependency ratio The effect of migration on the dependency ratio is complex. On the one hand, the fact that migrants are mainly of working age reduces the dependency ratio. On the other hand, immigrant women tend to have higher fertility rates, which in the short term contributes to a higher dependency ratio by adding more children to the population. However, this also reduces the average age of the population and in due course produces more workers, thereby lowering the dependency ratio as these children grow up and reach working age. Finally, to complicate matters further, evidence suggests that the longer an immigrant group is settled in the country, the closer their fertility rate comes to the national average. Internal Migration While most media attention focuses on international migration, we should note the importance of internal migration within the UK. During the industrial revolution of the 19th century, which was based geographically in the North of England, South Wales and West Scotland, there was a population shift from the largely agricultural South to the Industrial North to take up jobs in textiles, mining, shipbuilding and iron and steel. This produced a corresponding shift from rural to urban living; in 1851, Britain was the first country to see more than half its population living in towns and cities. During the 20th Century, as these industries began to decline and newer ones such as motor cars, electrical engineering and chemicals began to develop in the South and Midlands, there began a population shift in the opposite direction in search of economic opportunities. More recently, London and the South East have exerted an important pull because of the growth of the finance and service industries located there. A corresponding trend has been suburbanisation, with the growth of large residential areas surrounding the major cities. However, in recent years, there has been a reversal of the outflow of population from inner city areas. ?? ?? ?? ?? 17 ...read more.