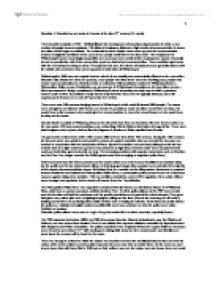 Describe law and order in London in the late 19th century

Question 1: Describe law and order in London in the late 19th century (15 marks) The industrial revolution (1750 - 1850) facilitated the development of manufacturing industries in which a vast number of people became employed. This influx of employees followed a high density of accommodation in towns and cities, which began to cultivate. The substantial number of jobs meant a low pay and the accommodation reached unhygienic conditions where up to seven people would live in one tiny room. The employment in Whitechapel became exceedingly competitive and numerous were unable to find employment, women eventually turned to prostitution with their money often spent on alcohol and accommodation. These conditions got worse with the unemployed turning to crime. Throughout each year, the classes of society became gradually distant until the middle class and lower class were separated in both sides of Whitechapel. Whitechapel in 1888 was not a typical London suburb; it was socially and economically different to the rest of the Victorian City. Infested in crime and poverty, most people who lived there were the working poor, people who would work occasionally and criminals, in fact an estimated 1500 prostitutes worked in Whitechapel from a Metropolitan Police survey. Prostitution was so common in Whitechapel that police on the beat often turned a blind eye towards it. Being a prostitute in Whitechapel's areas of poverty was only way in which a penniless woman could survive. A prostitute usually served only the lower class and was typically divorced, had a life expectancy of 35 years and a cost of 4 pence for her service. There were over 200 common lodging houses in Whitechapel, which could fill almost 9000 people. The rooms were unhygienic and infected with insects and vermin. If a prostitute could not afford somewhere to sleep, she would have to find someone who would give her accommodation in return for sexual favours or she would have to sleep on the street. ...read more.

Social reformers used the Whitechapel murders to their advantage and argued the need to improve living conditions of poor people. In 1875, social reformers had helped to pass a piece of legislation, which allowed the government to clear London's slums. Property owners were charging for double beds, single beds and the "lean-to", a way one could sleep by hanging their arms over a rope strung across a room. The Artisans Dwelling Act of 1875 meant London authorities were allowed to buy slum property and demolish it before building new accommodation for the working classes; however, property owners were compensated for the loss of their properties using the rent they were getting before their property was bought from them. Since the public of Whitechapel who needed accommodation was poverty-stricken, they could only afford low rents, so in effect; this policy caused overcrowding in the slums. This was for the reason that property owners squeezed plenty of people into each property to claim maximum compensation while their properties were compulsorily purchased from them. There was political unrest occurring in which the Liberals and the Irish Home Rule Party used the ripper and newspapers to their full advantage. Queen Victoria also wrote to the Prime Minister urging him to take action to catch the ripper. Whitechapel in 1888 was not a typical London suburb. Infested in crime and poverty, an estimate of 1500 prostitutes served in Whitechapel from a Metropolitan Police survey. Charles Booth's analysis of Whitechapel found that 2% of the East End was homeless; 4% were street urchins and the very poor; 12% were poverty stricken, and a disturbing 55% of children died before the age of five. There were also foreigners such as Jews who had fled the Pogroms in Russia and Poles expelled from Prussia. Tabloid Newspapers such as The Star (London) and the Illustrated London News were created and the education act of 1870 extended basic education for children up to the age of 11, which created a literate generation ready for this tabloid, Ripper influx. ...read more.

The murderer had no motive other than to brutally kill and degrade the sex of the prostitutes and to show the victim in such a state to shock and distress the observer. The murder was quick and careful and made sure the satisfaction was received from the murders. The serial nature of the crime meant that the technology available could not the catch the criminal, as the method was prevention and not detection. The prostitutes continued to work despite the risks as a typical prostitute had to work at least once a day to get somewhere to sleep for the night and an alcoholic drink. After the fifth murder the killer stopped, probably from being killed, realising the danger of being caught or fleeing to another country. On November 10th, the Cabinet allowed a pardon to any accomplice of the killer who would turn him in, hoping that if there were a group, they would confess to the murders and the members of their group. The investigations were published and interfered with by the press. On 13th September, The East London Observer made a statement in that Catherine Eddowes knew the identity of Jack the ripper and was intending to claim the reward. On the 27th September, the ripper in concept that his identity would be exposed brutally murdered Catherine Eddowes that even the toughest police found difficulty entering the crime scene. In 1888, the police were oblivious to sexual psychopaths and were not prepared for the ripper's serial attacks. Currently, they have the technology such as elaborate profiling techniques and have amassed a database of information with which forensic psychologists and psychiatrists can determine the kind of individual perpetrating the crime. Overall, the police did not catch the ripper but they did make stop the serial murders and made every effort to free London of the terror. As the identity of the ripper had not been solved, it has helped create books films and documentaries and educate the future generations about this investigation even though it which happened more than a century ago. ?? ?? ?? ?? 1 ...read more.