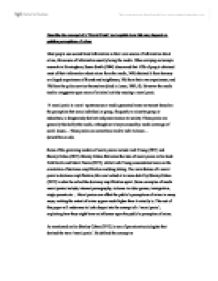 Describe the concept of a 'Moral Panic' and explain how this may impact on publics perceptions of crime Most people use second hand information as their core source of information about crime, this source of information usually being the media. When carrying out sample research in Birmingham, Susan Smith (1984) discovered that 52% of people obtained most of their information about crime from the media, 36% obtained it from hearsay or alleged experiences of friends and neighbours, 3% from their own experiences, and 1% from the police service themselves (cited in Jones, 2001; 8). However the media tend to exaggerate upon areas of criminal activity causing a moral panic. 'A moral panic is a semi- spontaneous or media generated mass movement based on the perception that some individual or group, frequently a minority group or subculture, is dangerously deviant and poses menace to society. These panics are generally fuelled by the media, although not always caused by, media coverage of social issues... These panics can sometimes lead to mob violence... (newsfilter.co.uk). Some of the governing models of moral panics include Jock Young (1971) and Stanley Cohen (1972). Stanley Cohen fabricated the idea of moral panics in his book Folk Devils and Moral Panics (1972), whilst Jock Young concentrated more on the correlation of deviance amplification and drug taking. The main feature of a moral panic is deviance amplification; this was looked at in more detail by Stanley Cohen (1972) in what he called the deviancy amplification spiral. Some examples of media moral panics include; internet pornography, violence in video games, immigration, single parents etc... ...read more.

Moral panics can occur at anytime anywhere. However they tend to occur at times when societies are finding it difficult to modify to momentous changes. Such changes lead chaos within society creating panic among people regarding the status of their society. Moral panics are represented by the mass media in many ways; through newspapers, the radio, and the television. The nature of them can be based on both novel events and events which have been of existence for a long time, but it takes something to spark off the importance of it. For instance, bullying has always occurred throughout schools but in 2002 13-year-old Jack Glasby took is own life because of the bully he received at school, due to this there was a moral panic in the mass media about bullying in schools. Following this a number of parents decided to remove their children from schools. The effects caused from moral panics can go in one of two directions; they can either die out quickly, or have more severe long-term consequence; as it did in the 'video nasties'. The 'video nasties' was recognized after the murder of the toddler James Bulger by two juveniles (Critcher, 2003; 64). The media turned this into a moral panic; many papers said that dramatic action was needed against the 'evil'. Bradley cited the Times newspaper as an example, the headline read 'restore the notions of pure innocence and born evil in a way that few people were prepared to question'. ...read more.

commented: 'The most likely reason for public misperceptions is that information about sentencing comes largely fro the media, and news values militate against balanced coverage. Erratic court sentences make news; sensible ones do not. As a result large parts of the population are exposed to a steady stream of misleading stories about sentencing incompetence' (cited in Jones, 2003; 89). Therefore, evidence supports the notion that the mass Medias coverage of crime is the primary explanation for the public's apprehension regarding crime throughout episode when the actual crime rate is not increased. Consequently, it can be concluded that the way in which the media does this is through the creation of 'moral panics', an intelligent but complex process. The media are constantly profiting from making an impact upon publics perceptions of crime 'by mass manipulation, commercial 'laissez-faire', and consensual paradigm' (Jones, 2003; 86). The correlation between 'moral panics' and public's perceptions of crime functions just like the 'deviancy amplification spiral'. The media intensify moral panics, consequently amplifying the 'fear' of crime in society, resulting in more abnormal behaviour, higher criminal sentences, and an increase both official and unofficial statistics in the area paid attention to. Evidence suggests that public's perceptions of crime are formed in one way or another by 'moral panics'. Jones (2003) broadly summed up this: "Left realists...claim that people select their newspapers and their TV viewing in accordance with their existing attitudes. Yet, how did these attitudes come to be formed in the first place? As most people are not the victims of serious crime, the obvious alternative source of information is conversation. However, questions then arise to how the other person's opinions were reached. ...read more.