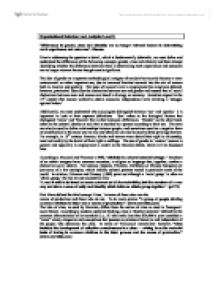 'Differences in gender, class and ethnicity are no longer relevant factors in determining work experiences and outcomes'. Discuss.

Organisational Behaviour and Analysis (Level 1) 'Differences in gender, class and ethnicity are no longer relevant factors in determining work experiences and outcomes'. Discuss. Prior to addressing the question in detail, which is fundamentally debatable, we must define and understand the differences of the following concepts; gender, class and ethnicity and then attempt identifying whether the differences between them in determining work experiences and outcomes are no longer relevant factors though remain significant. The idea of gender as a separate methodological category of analysis has recently become a more controversial or rather important one, due to increased feminist research into the role of women both in America and globally. The issue of women's role in employment has long been debated, however, patriarchal ideas blur the distinction between sex and gender and assume that all social distinctions between men and women are based in biology or anatomy. Scientists argued in the 19th century that women worked to obtain economic independence were initiating a 'struggle against Nature.' Additionally, we must understand why sociologists distinguish between 'sex' and 'gender,' it is important to look at their separate definitions. 'Sex' refers to the biological factors that distinguish 'males' and 'females' that is their anatomic differences. 'Gender' on the other hand, refers to the cultural identity or role that is ascribed to a person according to their sex. The term can also be used to define relationships between people, and sometimes used as a negative form of classification in the same way as race and ethnicity can also be used to dress privilege barriers. ...read more.

Despite the increase in women entering employment, they continue to receive considerably low wages in comparison with men. Supposedly, there have been improvements in the workforce in terms of sexual equality, however, Coleman and Cressey (p.275;1980) state the gap between both genders has surprisingly increased in the last twenty years. The average full time women worker received 67 per cent of the amount received by men in 1957. This figure decreased by 5 per cent in 1970, and by 1974 it dropped another 2 per cent. This continuous dropped could be due to the fact that the steadily increasing number of women are entering the workforce for the first time therefore leaving them with no alternative, but to 'start at the bottom.' As a result it is unlikely that occupational discrimination against women has decreased entirely. Another factor for the wide gap is due to women entering lower-paid jobs and hold lower ranking jobs within their occupation. However, there are even wage differences when men and women do the same type of work, in relation Grint argues this point: "One of the most persistent aspects of paid labor is that relating to gender-related inequality of rewards. Ignoring all the many problems involved in wage calculations, which blur issues of skill, qualifications, and hours etc, it is a sobering experience to consider the gendered wage differential" (Grint, K, ch6 ;1998) Employers say men are paid more, because they have families to support although women in today's society are more independent. ...read more.

More importantly, if given the position of a 'man's role' in a company they still receive lower paychecks, despite of the 'Equal Opportunity Act,' which was introduced in the 1970's. One question which must be taken into consideration is 'How well is equal opportunities used in employment.' Although women's right exist, they do not seem to be used to their full potential, if anything patriarchal society does not want this gender equality within the workforce to exist. Personally speaking, women have been through pain and struggle to achieve what there rights today, as a result, equality has improved dramatically, as women are now accepted in more jobs then ever, and women are becoming much more independent but this sense of equality may not be evident globally, but definitely in western society. Ethnic minority groups are now entering better jobs, and education is literally available for everybody, however, the fact remains, that many members of ethnic groups are categorized in very low class positions, and although more members are entering high occupations and gaining valuable experience more then ever, the existence of discrimination will always exist, whether we like it or not, due to either stereotypical ideologies as well as members of the dominant group substantiating and protecting their position in class regardless of what measures are taken. Overall, in my opinion inequality will always exist within the workforce in relation to all three concepts; this is one factor, which must be accepted. However, there has been a vast improvement in all three elements within employment, and hopefully this will continue progressing for a more equal society, not just in the Western society, but globally. ...read more.