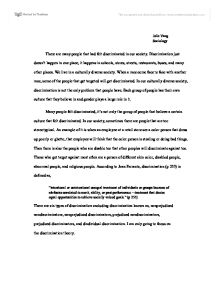 I have been in this situation many times when I shop at different stores. I remember when I was shopping at a retail store called JC Penny in Wisconsin Rapids, WI, I felt discriminated. The day when I was shopping there, I was dressed in a t-shirt, sweatpants, and carrying a textbook sized bag. When I was shopping around, I didn't really notice that people were watching me. After awhile when I've been walking around and had shopped for about thirty minutes, I've noticed that an employee was following me around. I also did notice that most of the employees were all white peoples too. I felt discriminated, but I wasn't sure if it was because of how I was dressed or because I was Asian. ...read more.

(p 269) In the Hmong culture, there are certain roles for both the men and women. If the families are traditional, the men are the more inferior in the family. When I was growing up, I was taught that the women had to wake up early to cook for the family, do household chores, babysit, and other chores for the women. Also at traditional family gathering, the women are usually the ones that are cooking and setting up the table for the meals for the family. When they are done with all those, the men are the ones that eat first and then the women and kids eat afterwards. My families are a traditional family, so I'm a girl, I follow those rules. The men had more power in the family and they also have more freedom. WORKCITE Ferrante-Wallace, Joan. "Socialization." Sociology: a Global Perspective. 7th ed. Belmont, CA: Thomson Wadsworth, 2008. 99-106. ...read more.