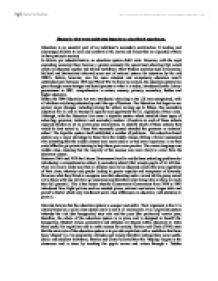 Discuss in what ways social class impacts on educational experiences.

Discuss in what ways social class impacts on educational experiences. Education is an essential part of an individual's secondary socialisation. It teaches and encourages children to learn and conform to the norms and values that are expected of them in their particular society. In Britain, pre industrialisation, an education system didn't exist. However, with the rapid expanding economy there became a greater necessity for specialised schooling that would create an educated, capable and skilled workforce. Most Western societies such as Germany, Holland and Switzerland achieved some sort of national system for education by the mid 1800's. Britain, however, was far more reluctant and compulsory education wasn't established until between 1870 and World War II. Since its creation, the education system has gone through many changes and developments to what it is today, introduced by the Labour government in 1997, comprehensive in nature; nursery, primary, secondary, further and higher education. Before the 1994 Education Act was introduced, schooling in the UK was unorganised, with all children only being educated up until the age of fourteen. The Education Act began to see several major changes, including raising the school leaving age to fifteen, free secondary education for all and to attempt at equality and opportunity for all, regardless of their class. Although, with the Education Act came a tripartite system which establish three types of schooling; grammar, technical and secondary modern. Allocation to each of these schools required children to sit an eleven plus examination, to identify which of these schools they would be best suited to. Those that successful passed attended the grammar or technical school. ...read more.

Due to the postcode lottery, schools are usually allocated to what area the child lives in (generally the school closest to their home). Most of these working class schools will have large class sizes, low quality of education therefore less future opportunities. And because of the lack of capital available they will have less access to resources such as books, educational trips, a room of their own to study in, own their own computer, have a private tutor or go to a private school. The middle classes on the other hand, have far more choices and opportunities when it comes to education. Firstly they are more likely to be able to afford private education, therefore can choose the school and its location. Children that attend these private schools will have small class sizes, good quality of education and better future prospects than those in the working classes because there is more encouragement from their school, teachers and parents for them to succeed. Life chances are also privileges and don't just include what goes on within the classroom. These can be recreational activities such as sailing, piano lessons etc. Again, those in the ruling classes are more inclined to have the opportunities to carry out these extra curricula activities because they can afford to do so, or it could be that the private school that the child attends is more likely to have them as part of the curriculum. Health is another issue that will affect and concern all classes in relation to education. ...read more.

For society to function, all these occupational roles must be filled. Davis and Moore believed that the most important jobs such as doctors need to be given to the most qualified and most intelligent individuals. This is done through a 'sifting and sorting' process, linking it to the school - if you are a working class child at a poor school, their job is likely to be poor also. Marxism and Functionalism are both macro structural theories which look at society as a whole, ignoring small groups and/or individuals. Marxism theory looks at the way the social structures of society affect the working classes, while functionalist looks at the social structures but emphasises on harmony, integration and stability. Therefore Marxists and functionalists have completely different ideologies on the education system. Functionalists believe it to be meritocratic, the idea that everyone has equal opportunity to achieve, or that position and reward is based on effort or ability, which Marxists reject. They believe that the educational status is based upon social class rather than meritocracy. Both perspectives argue that occupational roles are dictated i.e. working class children will get working class jobs, but both fail to recognise that there are some manual workers children that do well in education and therefore do find a successful job. It has nothing to do with nature or DNA. Marxist views are too deterministic; they focus too much on the class system and ignore other important factors such as gender and ethnicity. And it is extremely unlikely that all children internalise all the norms and values that are transmitted by teacher and/or the hidden curriculum. ...read more.