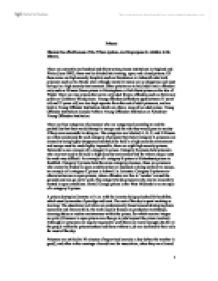 Discuss the effectiveness of the Prison system, and its purpose in relation to its history.

Prisons Discuss the effectiveness of the Prison system, and its purpose in relation to its history. There are currently one hundred and thirty-seven prisons institutions in England and Wales (June 2001), these can be divided into training, open, and closed prisons. Of these some are high security hospitals such as Broadmoor or Ashworth who hold prisoners such as Ian Brady, who although mentally insane are so dangerous and must be kept in a high security environment. Other prisons are to hold adult male offenders only such as Winson Green prison in Birmingham or Park Hurst prison on the Isle of Wight. There are also prisons that serve only adult female offenders such as Holloway prison or Cookham Wood prison. Young offenders (offenders aged between 15 years old and 21 years old) are also kept separate from the rest of adult prisoners, and are held in Young Offender Institutions which are often a wing of an adult prison. Young Offender Institutions include Feltham Young Offenders Institution or Aylesbury Young Offenders Institution. There are four categories of prisoners who are categorised according to and the probability that they would attempt to escape and the risk they would pose to society if they were successful in doing so. The categories are labelled A, B, C, and D Prisons are often maintained for each category of prisoner they hold. Category A prisoners are classed as being highly dangerous and should be held in a high security environment and escape must be made highly impossible, there are eight high security prisons, Belmarsh is one example of a category A prison. Category B prisons hold prisoners who may not need to be held in high security environment but for whom escape must be made very difficult. ...read more.

Another purpose is to deter the individual from committing further crimes through the fear of punishment as well as deterring other potential criminals. Another suggestion for the purposes of prison is that people sent to prison to be reformed or rehabilitated, that is to say they come to realise the 'error of their ways' and that crime is wrong and learn through education to change their ways. Another argument for the purpose of imprisonment is simply the protection of society through incapacitation, people may have been sent to prison because the crimes they have committed shows they present a threat to the public and imprisonment ensures they are unable to commit further crimes because they are not free to commit them. The idea of imprisonment as a punishment is a fairly recent one; prison itself was not a form of punishment until a few hundred years ago. Imprisonment was initially used by the clergy in this country as a punishment against persons who had committed religious crimes. The building of local gaols began after Henry II issued the Assizes of Clarendon in 1166, which commanded that local gaols be built in the counties to hold persons awaiting trial. The use of the gaols gradually extended to holding persons convicted of crimes who were awaiting their punishment, which could be anything from exile (banishment from society or the kingdom) deportation, fines or the punishments of public flogging, torture, mutilation or execution. The prisons also became a system of coercion, debtors were held in prison until they paid their debt. This provides us with a comparative with the current practice of holding persons awaiting trial on remand. ...read more.

People who serve long sentences become institutionalised and dependent on the prison regime and as a result cannot function in society. In conclusion, the history of prisons system in Britain has constantly changed the purpose of prisons in this country, which collectively given us the reasons for imprisoning people today as a form of punishment, deterrence, public protection and a place of reform and rehabilitation. Prisons offer protection of the public from dangerous criminals as they prevent them from committing further offences by keeping them out of society but prisons do not seem to work as deterrence to criminals, recidivist rates also indicate prisons as a failure as places of reform and rehabilitation. This may in part be due to the lack of training prisons or training courses available in prison which help to educate and reform. There are despite improved conditions over the years and the introduction of conventions and rights in relation to prisoner's still unsatisfactory conditions under which prisoners are kept. There is also need to address the composition of the prison population, which found an incredibly high proportion of prisoners from ethnic minorities. The effectiveness of prisons is very questionable as the arguments against prison certainly outweigh the arguments for the system. With costs of such a system being a very high and the benefits in relation to the costs relatively low. Alternative forms of punishment need to be established with emphasis being placed on rehabilitation and reform instead of the wide spread use of imprisonment, which has continually risen causing overcrowding. Although prisons may be the only solution to persistent and highly dangerous offenders. 1 ...read more.