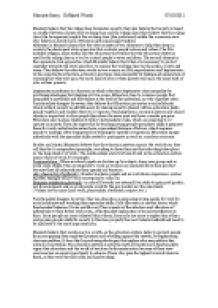 Discuss the Marxist view of education.

ï»¿Marxists Essay - Órfhlaith Woods 07/10/2012 Marxists believe that the ruling class dominates society, they also believe that society is based on conflict between classes (the working class and the ruling class) they believe that the ruling class (the bourgeoisie) exploit the working class (the proletariat) unlike the consensus view who believe in meritocracy. (Everyone gets equal opportunities) Althusser (a Marxist) claims that the state consists of two elements to help them keep in control; the ideological state apparatus that controls people's ideas and values. The ISA includes religion, mass media and the education that means that the education system is used by the ruling class as a tool to control people's views and ideas. The second element is the repressive state apparatus, which Marxists believe that when it is necessary to protect capitalist interests the state uses force to repress the working class via the police, courts and army. They believe the education works in two ways as an ISA; reproduction and legitimation. In the reproduction function, education produces class inequality by failing each generation of ensuring that they end up in the same kind of jobs as their parents end up in the same kind of jobs as their parents. ...read more.

The relationships and structures found in the education system mirror those of work. For example; Fragmentation - When in school pupils are broken up by subject, class, year group and in some cases ability. This corresponds to work as workers are alienated from their product because they all only perform their specific job function also a hierarchy of authority - Heads>teachers>pupils and in work Boss>supervisor>worker Another example of how work correspond to school is Extrinsic satisfaction/rewards - in school Rewards are external (we study to gain good grades, not for enjoyment and in work people work for the pay packet, not for enjoyment ( Values are the same hard-work, punctuality, obedience, respect, etc ). Functionalists disagree however; they see education as preparing young people for work by social solidarity and teaching them specialist skills. Role allocation is another factor which functionalist believes. (Davis and Moore) This consists of the selection and allocation of individuals to their future work roles, a functionalist explanation of social stratification is that ; Some people are more talented than others, Some jobs are more complex than others and require greater skill, for society to function properly the most talented individuals need to be allocated to the most important jobs. ...read more.

They are able to partially see through the meritocratic ideology that claims working class pupils can get on through hard work. For Willis, the irony is that by resisting the schools ideology, the lad's counter school culture guarantees that they will fail, thereby ensuring that they will end up in the manual work that capitalism needs someone to perform. Thus, their resistance to school ends up reproducing class inequality. Feminist s argue against Willis' study of counter-school culture as it points out that females are largely absent from the study. Romanisation is another criticism of Willis' study, for Willis has been criticised for presenting the lads as working class heroes despite their anti-social behaviour. Marxists offer some validate ideas about the education system. However, many agree and disagree for example the postmodernists believe that Marxism is out of date, and the correspondent no longer exists. Feminists argue that schools reproduce not only capitalism, but patriarchy too. Also it is evident that Marxists argue amongst themselves as how reproduction and legitimation take place. Bowles and Gintis take the deterministic view and assume that pupils passively accept indoctrination. Willis rejects this simple 'brainwashing' view and shows how pupils may resist school and yet still end up in a working class jobs. ...read more.