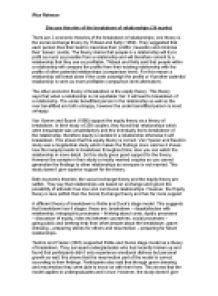 Discuss theories of breakdown of relationships

They say that relationships are based on exchange and ignore the possibility of altruistic true love and communal relationships. However, the Equity theory is less selfish than the Social Exchange theory and has far more support. A different theory of breakdown is Rollie and Duck?s stage model. This suggests that breakdown has 6 stages, these are; breakdown ? dissatisfaction with relationship, intrapsychic processes ? thinking about costs, dyadic processes ? discussion of equity, roles etc between yourselves, social processes ? going public and seeking help from other people about the breakdown, grave-dressing ? preparing stories for others and resurrection ? preparing for future relationships. Tashiro and Frazier (2003) supported Rollie and Ducks stage model as a theory of breakdown. They surveyed undergraduates who had recently broken up and found that participants didn?t only experience emotional distress but personal growth as well; this shows that the resurrection part of the model is correct according to their findings. Participants also said that through grave dressing and resurrection they were able to move on with their lives. ...read more.

However, this model can be used for other reasons, it shows what stage a breakdown may be in, and this then suggests possible ways to deal with it, so this theory is useful as it has real life applications. These theories are based on the cognitive approach. Both the theories only apply to the western culture where people have a choice about breaking up or divorcing so you cannot generalise them to all relationships from every culture as there are cultures where this is not possible. In conclusion, both the economic theories and Rollie and Duck?s stage model do not explain all relationships. They both explain different things so you cannot tell which is better, the economic theories tell us why a breakdown occurs and Rollie and Duck?s stage model explains how a breakdown occurs. Instead, we could use them both together to explain how and why relationships breakdown, Rollie and Duck?s stages already include costs and equity so it is possible to do this. ...read more.