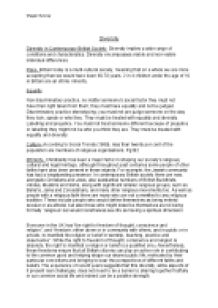 ﻿Megan Bunney Diversity Diversity in Contemporary British Society- Diversity implies a wide range of conditions and characteristics. Diversity encompasses visible and non-visible individual differences. Race- Britain today is a multi-cultural society, meaning that on a whole we are more accepting than we would have been 60-70 years. 2 in 4 children under the age of 10 in Britain are an ethnic minority. Equality Non discriminatory practice, no matter someone?s social factor they must not have their right taken from them, they must have equality and not be judged. Discriminatory practice stereotyping; you must not pre-judge someone on the way they look, speak or who they. They must be treated with equality and diversity. Labelling and prejudice. You must not treat someone different because of prejudice or labelling they might not be who you think they are. They must be treated with equality and diversity. Culture- According to Social Trends (1989), less than twenty per cent of the population are members of religious organisations. Pg282 Ethnicity- Christianity has been a major factor in shaping our society?s religious, cultural and legal heritage, although throughout past centuries some people of other faiths have also been present in these islands. For example, the Jewish community has had a longstanding presence. In contemporary British society there are now, alongside Christians and Jews, also substantial numbers of British Buddhists, Hindus, Muslims and Sikhs, along with significant smaller religious groups, such as Baha'is, Jains and Zoroastrians, and many other religious movements too. ...read more.

To be a ?citizen? is to be a member of a particular society with the right to political participation in it. British citizens are co-owners of our society and share the responsibility for shaping its future, working together for the common good. Importantly, in Britain there are democratic institutions which give expression to this shared responsibility and through which its citizens can influence the evolving framework of law and can contribute to the forming and implementation of public policy. The institutions of the state may not always operate in an ideal way and will need to be adapted from time to time to reflect changing circumstances in appropriate ways in order to maintain the loyalty of its citizens. But it is important for citizens to support and protect the democratic character of these institutions against those who seek to undermine them, whether from without or within. Engagement with the political process enables citizens to join together in the task of charting the way forward for this society, both locally and nationally, and in helping to solve the difficult and complex problems it faces. This involves a constant process of interaction and renegotiation as the road ahead unfolds. This process of engagement needs to be open to all and to provide room for robust and passionate argument where members of society feel able to express their feelings, concerns and fears. ...read more.

We all have a role to play in combating stereotyping, whether of our own communities and traditions or those of others. Education in schools needs to promote encounter and awareness about different cultures and faiths. Likewise the media needs to provide balanced and non-sensationalist reporting and to avoid promoting myths and stereotypes which can feed unfounded fears and misrepresent reality in ways which serve to exacerbate tensions and divisions. As one aspect of this, the media should do more to educate people about the various faiths in the UK and to highlight positive inter faith relations in different areas of the country ? not always focusing on negative stories. Conclusion The Inter Faith Network, along with its member organisations, is committed to helping shape a Britain where all can live and practise their faith with integrity. It is also committed to encouraging and supporting the development of better understanding not only both between Britain?s faith communities but also between them and wider society. We need to work together with energy, honesty and openness for the flourishing of this society and of our wider world. The future of our country will in part be shaped by its past but will not be determined by it. Its future is in the hands of all of us who make our home here. http://www.interfaith.org.uk (July 2007) ...read more.