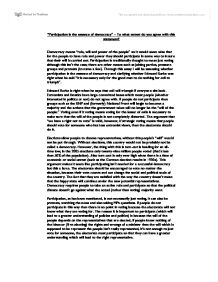 “Participation is the essence of democracy” – To what extent do you agree with this statement?

Democracy means “rule, will and power of the people” so it would seem wise that for the people to have rule and power they should participate in some way to insure that their will is carried out. Participation is traditionally thought to mean just voting although this isn’t the case; there are other means such as joining parties, pressure groups and protests (to name a few). Through this essay I will be assessing whether participation is the essence of democracy and clarifying whether Edmund Burke was right when he said “it is necessary only for the good man to do nothing for evil to triumph”.

Edmund Burke is right when he says that evil will triumph if everyone sits back. Extremists and fanatics have large committed bases which most people (whether interested in politics or not) do not agree with. If people do not participate then groups such as the BNP and (formerly) National Front will begin to become a majority and the actions that the government takes will no longer be the “will of the people.” Voting even if it voting means voting for the lesser of evils is necessary to make sure that the will of the people is not completely distorted. The argument that “we have a right not to vote” is valid, however, if strategic voting means that people should vote for someone who has less extremist views, then the electorate should do it.

Elections allow people to choose representatives, without this people’s “will” would not be put through. Without elections, this country would not be probably not be called a democracy. However, the thing with this is turn-out is heading for an all-time low, in the 2005 elections only twenty-nine million people voted (that’s less than 50% of the population). Also turn-out is only ever high when there is a time of economic or social unrest (such as the German election results in 1930s). This argument makes it seem like participating isn’t needed for a successful democracy but this a farce. The electorate should be encouraged to vote no matter the situation, because their vote counts and can change the social and political scale of the country. The fact that they are satisfied with the way the country doesn’t mean that the happy state will continue under the new potential representatives. Democracy requires people to take an active role and participate so that the political climate doesn’t go against what the actual (rather than voting) majority want.

Participation, as has been mentioned, is not necessarily just voting, it can also be protests, watching the news and also asking MPs questions. If people do not participate in this way then there is no point in voting because the electorate will not know what they are voting for. The reason it is important to participate (which will lead to a greater understanding of policies and politics) is because the will of the people depends on the representatives that are elected, if people know nothing of the ideas or (if re-electing) the rights and wrongs of a minister then the will which is supposed to be represent the people isn’t really represented, it’s not enough to just vote for someone, the electorate must participate so that they can have a greater understanding which will lead to the right representative.

To conclude, participation is the essence of democracy, by being informed and taking and active role whether voting or protesting can express the will of the people and that is what democracy is all about and all the other factors of a democracy are maintained by participation. The arguments that people should participate outweigh those that say we should not. People may not be interested in politics but it is in their best interest to be, participating is a symbolic duty of any citizen. The most that can be done is to encourage people to vote, new ways such as texting and e-mailing votes are currently being put through trials. The excuse that people are happy with the status-quo can not be maintained as a reason for not participating because the status-quo can be changed through non-participation. People all over the world, such as the Northern Alliance in Afghanistan post-11/9 having been fighting for democracy and it is a discredit to them if the electorate just shun participation. Participation can help express everyone’s opinions. The will is certainly the essence of democracy, and will is expressed through participation.