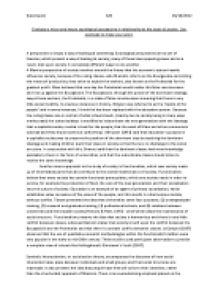 Evaluate a micro and macro sociological perspective in relationship to the study of society. Use examples to make your point.

﻿David Jacob 12D 04/10/2012 Evaluate a micro and macro sociological perspective in relationship to the study of society. Use examples to make your point. A perspective is simply a way of looking at something. Sociological perspectives are as set of theories, which present a way of looking at society; many of these have opposing views and as a result, look upon society in completely different ways to one another. A Marxist perspective of society revolves around the theory that the economic system heavily influences society, because of the ruling classes -who Marxists refer to as the Bourgeoisie-controlling the means of production; they strive to exploit the workers, also known as the Proletariat for the greatest profit. Marx believed that one day the Proletariat would realise this false consciousness and rise up against the Bourgeoisie. The Bourgeoisie, through the power of the dominant ideology, keeps these workers, the Proletariat, in a state of false consciousness meaning that there is very little social mobility. In previous instances in history, Religion was referred to as the ?opiate of the people? and in some instances, I think this has been replaced with the education system. ...read more.

LeCompte (1997) observed that the use of qualitative research methodologies within the functionalist tradition were very popular in the early to mid-20th century. These studies used participant observation to provide a complete view of schools like Hollingshead?s Elmstown?s Youth (1947). Symbolic Interactionism, or social action theory, encompasses the discovery of how social interaction takes place between individuals and small groups; and that social structures are manmade. It also presents the idea that people have free will to form their identities, rather than the structuralist approach of Marxism. There is an overwhelming emphasis placed on the individual, resulting in a micro approach, an example of which is analysing an individual gang instead of crime statistics as a whole, to show how they are labelled deviants. A further example of such is that people?s behaviours are not scripted, it is solely based on the individual?s perception of the event, and the resultant action will further influence the behaviour of the people involved. Participant observation has again been used in interpretive perspective, such as ?Making the Grade? (1968) by Becker, Geer, and Hughes. Symbolic interactionism however is concerned with face-to-face encounters and how individuals are classified and labelled. ...read more.

Liberal feminism wants to ensure that women are given equal chances in life with the present system through changes in the law. It can be argued that the supposed patriarchal society that feminists seek to change is slowly diminishing. There are a higher percentage of females attending university and going into higher paid jobs than there were 50 years ago; it is shown that girls also achieve higher grades in GCSE?s and A-Levels than boys, which may be because of physiological differences, or that girls pay more attention in a school environment. This can be clearly shown through quantitative data such as exam results and by looking at the percentage split of graduates getting professional jobs. In conclusion, the study of society is ever changing and far too complex to have one perspective that is completely right, leading me to believe that a combination of perspectives is the only way that society can begin to understand itself. Education is also a very complex aspect of society as it is influenced by the individual, the ruling classes, the law and also how it is used- meaning that again, you cannot use one perspective to measure it and make a judgement on it. ...read more.