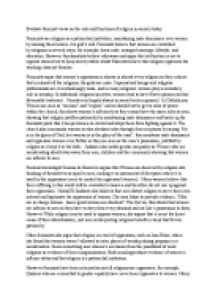 Evaluate feminist views on the role and functions of religion in society today.

﻿Evaluate feminist views on the role and functions of religion in society today. Feminists see religion as a patriarchal institution; maintaining male dominance over women by making them believe it is god?s will. Feminists believe that women are controlled by religions in several ways, for example, dress code, arranged marriage, lifestyle, and education. However functionalists believe otherwise and argue that its function is not to oppress women but to keep society stable whilst Marxists believe that religion oppresses the working class not females. Feminists argue that women?s oppression is shown in almost every religion as they criticise that in almost all the religions, the gods are male. Supernatural beings and religious professionals are overwhelmingly male, and in many religions, women play a secondary role in worship. In traditional religious societies, women tend to have fewer options and less favourable treatment. Females are largely absent in sacred texts in general. In Catholicism Women are seen as ?unclean? and ?impure? and so should not be given roles of power within the church, this shows women?s inferiority as they cannot have the same roles as men, showing that religion justifies patriarchy by maintaining male dominance and backs up the feminists point that it keeps women in control and stops them from fighting against it. ...read more.

She uses Islam to provide evidence, ?Men are in charge women...hence good women are obedient? The Qur?an, this shows that women are inferior to men as they have to obey their every demand and are like a possession to them. However While religion may be used to oppress women, she argues that it is not the direct cause of their subordination, just men reinterpreting religious beliefs in ways that favour patriarchy. Other feminists also argue that religion is a tool of oppression, such as Jean Holm, where she found that women weren?t allowed to enter places of worship during pregnancy or menstruation. Karen Armstrong sees women?s exclusion from the priesthood of most religions as evidence of their marginalization. Both sociologist show evidence of women?s inferior status and that religion is a patriarchal institution. However feminists have been criticised as not all religions are oppressive, for example, Quakers who are committed to gender equality have never been oppressive to women. Many other sociologists disagree with feminists perspectives and believe that religion liberates women and also. ...read more.

Though feminists would argue that functionalists focus too much on the positives and overlook the oppressive practices in religion. Though both Marxists and feminists believe that religion masks the oppression they do not believe it serves the same people. Marxists as well criticise the feminist view and believe they ignore the fact the religion oppresses the ruling class. Though Marxist feminists share the view that religion is a tool of women?s oppression but under capitalism where the Church reinforces traditional gender roles whilst benefiting the ruling class. Marxists believe the main role of religion is to legitimise and maintain the power of the ruling class by keeping the working class from rising up, doing this by misleading them into believing their suffering will be favoured in the afterlife. However radical and liberal feminists disagree with Marxists and argue that they focus too much on the economic system and ignore women?s inferiority, In conclusion feminists believe the main role and function of religion is to maintain a patriarchy to stop women from uprising against men. They believe religion oppresses women through rituals and worships, sacred texts and practices. However it has been heavily criticised by functionalists and Marxists for being too bias and not considering any positives. ...read more.