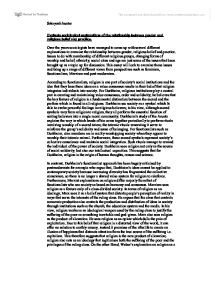 Evaluate sociological explanations of the relationship between gender and religious belief and practice.

Evaluate sociological explanations of the relationship between gender and religious belief and practice. Over the years sociologists have managed to come up with several different explanations to examine the relationship between gender, religious belief and practice. Issues to do with membership of different religious groups, changing forms of worship and belief, ethnicity, social class and age are just some of the issues that been brought up as a topic up for discussion. This essay will look to examine these issues and bring up a range of different views from perspectives such as feminism, functionalism, Marxism and post-modernism. According to functionalists, religion is one part of society's social institutions and the idea that they base there ideas on a value consensus results in their belief that religion integrates individuals into society. For Durkheim, religious institutions play a central part in creating and maintaining value consensus, order and solidarity; he believes that the key feature of religion is a fundamental distinction between the sacred and the profane which is found in all religions. ...read more.

He argues that the class that controls economic production also controls the production and distribution of ideas in society through institutions such as the church, the education system and the media. In his view, religion works as an ideological weapon used by the ruling class to justify the suffering of the poor as something inevitable and god-given. Marx also sees religion as the product of alienation. He sees religion as an opiate which dulls the pain of exploitation. Due to this belief that religion is a distorted view of the world, it can offer no solution to earthly misery, instead it promises of the afterlife to create an illusion of happiness that distracts attention from the true source of the suffering i.e. capitalism. This therefore suggests that religion is the new product of alienation; religion also acts as an ideology that legitimises both the suffering of the poor and the privileges of the ruling class. ...read more.

However, Woodhead criticises feminist explanations that simply equate religion with patriarchy an the oppression of women. She also argues that there are 'religious forms of feminism' ways in which women use religion to gain greater freedom and respect. For example, Woodhead says that whereas some see the veil worn by women as a form of oppression, to the wearer it may symbolise resistance to oppression. To conclude, there are various different perspectives and ideologies to explain religion. Whereas functionalist for example, see religion as a social institution, playing a central part in creating and maintaining value consensus, order and solidarity, Marxist see it as a an ideology distorting people's vision of reality and acting as an ideological weapon used by the ruling class to justify the poor as something god-given; these several explanations have been criticised and it would seem right to say that society is both benefiting and in other ways suffering from the relationship between gender, religious belief and practice. ?? ?? ?? ?? Sakaynah hunter ...read more.