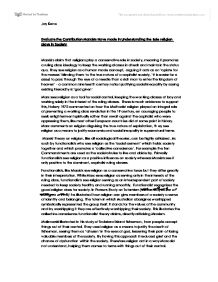 Evaluate the Contribution Marxists Have made in Understanding the Role religion plays in Society Marxists claim that religions play a conservative role in society, meaning it promotes a ruling class ideology to keep the working classes in check and maintain the status quo. They see religion as a human made concept, arguing it acts as an 'opiate for the masses' blinding them to the true nature of a capitalist society, 'it is easier for a camel to pass through the eye of a needle than a rich man to enter the kingdom of heaven' - a common nineteenth century notion justifying social inequality by saying existing hierarchy is 'god given' Marx sees religion as a tool for social control, keeping the working classes at bay and working solely in the interest of the ruling classes. These is much evidence to support this, Halevy 1972 commented on how the Methodist religion played an integral role of preventing a working class revolution in the 19 century, encouraging people to seek enlightenment spiritually rather than revolt against the capitalist who were oppressing them, like most other European countries did at some point in history. ...read more.

They used religion as a means to justify the death of fisherman, seeing them as 'chosen' in the eyes of god, lessening their pain of losing valuable members of the society. By having this approach it reduced grief and the chance of dysfunction within the society. Therefore religion act in a way Marx did not understand, helping them comes to terms with things out of their control. Marx saw no future for religion; his theory expressed the view of religion dyeing out and people rising up against the capitalist who once exploited them. This however was disproved in communist Russia, where in the eyes of Marx, there would be no need for religion. However, religious groups existed largely in secret and undercover, surely religion was not just a tool for controlling the masses as Marx once thought? Marxist theory also fails to consider secularization. Surely the ideological power of religion is undermined by the extremely low attendance at church! ...read more.

Finally another significant criticism of Marxist theory would be the rise in fundamentalist groups. These groups are often critical of society and attempt to change it, an example being the Taliban reverting to traditional Islamic values in Pakistan. They use there religion as a force for social change often meaning they justify literal interpretations of scared texts 'an eye for an eye'. These groups emerge in response to social inequality or perceived social crisis and don't fit into the Marxists theory or maintaining he status quo. It's quite clear that as much as Marxists theory stacks up in a modern society it simply cannot explain the growth of new religious movements and religious choices made solely for pragmatic reasons. We must recognise however Marxists theory is very dated and tied inexplicably to the 20th century industrialisation movement. The fact that some of these theories are still provable in out society today shows us how valuable Marxists theory of religion truly is. ?? ?? ?? ?? Jay Kane ...read more.

The writer answers the specific question asked, as they explain how religion is viewed by Marxists as a conservative force Ã¢â‚¬â€œ a tool for the upper class to institutionally control and manipulate the working class into serving capitalism. They also ...

The writer answers the specific question asked, as they explain how religion is viewed by Marxists as a conservative force Ã¢â‚¬â€œ a tool for the upper class to institutionally control and manipulate the working class into serving capitalism. They also discuss the fact that Neo-Marxists sometimes view religion in a more radical sense, which will gain lots of evaluative marks as both arguments are mentioned. This essay begins with a fair introduction, and concludes by stating that Marxism is a valid theory. This recognition will earn them a decent grade. But the structure is of a list fashion, which examiners loathe. The writer would do better to more frequently weave knowledge and evaluation into longer paragraphs: making it look more professional.

Functionalism, Neo-Marxism and Post-modernism is discussed, as well as traditional Marxism. Identifying what these sociological groups believe to be the role of religion is essential to successfully answering the Ã¢â‚¬Å“evaluateÃ¢â‚¬Â section of the question. However I think that in order to gain a higher mark, Feminist and Phenomenologist views should be stated also. Radical feminists believe that the role of religion is to continue the patriarchal nature of society, for example this is evident as women cannot be priests. Phenomenologists see religion as having a positive role for the individual - not society as a whole. By explaining this I think that the writer would gain both more evaluative marks as well as marks for showing specific sociological knowledge and understanding. In addition, when explaining Post-modernist theories (about anything) it needs to be said that they do not believe in Ã¢â‚¬Å“metanarrativesÃ¢â‚¬Â, which is one big story explaining life (such as religion). This just pinpoints to the examiner that you understand Post-modernism.
Religious quotes are used, Ã¢â‚¬Å“Ã¢â‚¬Ëœit is easier for a camel to pass through the eye of a needle than a rich man to enter the kingdom of heavenÃ¢â‚¬â„¢Ã¢â‚¬Â in the context of Marxism which is impressive. In addition the writer quotes Marx himself, Ã¢â‚¬Å“opiate of the massesÃ¢â‚¬Â which demonstrates that they have a broad knowledge of Marxism (which is what the question focuses on). Key terms, Ã¢â‚¬Å“Liberation theologyÃ¢â‚¬Â and Ã¢â‚¬Å“secularisationÃ¢â‚¬Â are referred to, which is excellent, because, in my experience, most candidates have a tendency to not bother with the sociological terms that sound complicated.
The candidate makes good use of contemporary issues/examples in relation to the role of religion, such as Ã¢â‚¬Å“Finally another significant criticism of Marxist theory would be the rise in fundamentalist groupsÃ¢â‚¬Â. This shows that the candidate can recognise and articulate relevant topical sociological debate.

There are a tiny number of grammatical issues in this essay, for example at the end of the first paragraph, the full stop is absent. On the whole spelling is good, although there are a few errors such as Ã¢â‚¬Å“dyeingÃ¢â‚¬Â instead of Ã¢â‚¬Å“dyingÃ¢â‚¬Â. But the candidate is clear and coherent overall, which will indeed contribute towards a fair mark.