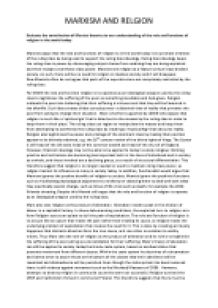 Transfer-Encoding: chunked ﻿MARXISM AND RELGION Evaluate the contribution of Marxist theories to our understanding of the role and functions of religion in the world today Marxists argue that the role and functions of religion to in the world today is to promote interests of the ruling class by being used to support the ruling class ideology. Ruling class ideology keeps the ruling class in power by discouraging subject classes from realising they are being exploited and then trying to overthrow class power. Marxists see religion as a feature only of class-divided society. As such, there will be no need for religion in classless society and it will disappear. Neo-Marxists often do not agree that parts of the superstructure are completely controlled by the ruling class. For MARX the role and function religion is to operates as an ideological weapon used by the ruling class to legitimises the suffering of the poor as something inevitable and God-given. Religion misleads the poor into believing that their suffering is virtuous and that they will be favoured in the afterlife. Such idea creates a false consciousness- a distorted view of reality that prevents the poor from acting to change their situation. ...read more.

In addition, functionalist would argue that Marxism ignores the positive benefits of religion to society. Marxist ignore the positivist functions such as ?facilitating physiological adjustment to misfortune? allowing them to deal well with what they psychically cannot change, such as times of life crisis such as death, for example the 2016 Orlando shooting. Despite this Marxist still argue that the role and function of religion is operate as an ideological weapon used by the ruling class. Marx also sees religion as the product of alienation. Alienation reaches peak in the division of labour in a capitalist factory. In these dehumanising conditions, the exploited turn to religion as a form Religion acts as an opiate to dull the pain of exploitation. The role and function of religion is to act just like an opium that masks the pain rather than treating its cause, so religion masks the underlying problem of exploitation that creates the need for it. This is done by creating an illusory happiness that distracts attention form the true cause, as it can other no solution to earthy misery. ...read more.

He uses the example of Liberation theology to illustrate this point. Until recent decades, the catholic church in Latin America sided with the bourgeoisie and right wing military dictatorship in countries such as El Salvador. Increasingly however some priests began to speak up for interests of the poor. The Liberation theology therefore developed, which argued that power and wealth, especially land, should be redistributed from the rich to the poor. This set of beliefs has developed an ideology whereby it encourages revolution rather than acts as the opium of the people. A more contemporary example is Poland in the 1990?s the ruling communist party was opposed by free trade unions and the roman catholic church. Eventually this led to the other throw of the communist system and its replacement by a western democratic regime. Marxist and Neo-Marxist theories successfully explain the role of religion in some societies, at some times, but do not explain how religion works in all societies at all times. The role and function of religion is not necessarily the ruling class ideology it can provide positive functions such as ?psychological adjustment to misfortune?. In addition, religion due to secularisation and structural differentiation resulting in disengagement of religion, religion is no longer used to maintain ruling class ideology. ...read more.