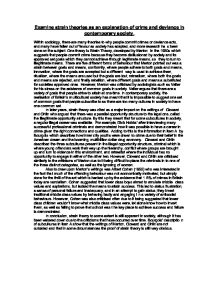 Examine strain theories as an explanation of crime and deviance in contemporary society. Within sociology, there are many theories to why people commit crimes or deviance acts, and many have fallen out of favour as society has adapted, and more research has been done on the subject. One theory is Strain Theory, developed by Merton in the 1930s which suggests that people commit crime because they become disillusioned by society and its approved set goals which they cannot achieve through legitimate means, so they to turn to illegitimate means. There are five different forms of behaviour that Merton pointed out was a strain between goals and means, conformity, where people adhere to both goals and means, innovation, where the goals are accepted but a different way is used to achieve them, ritualism, ...read more.

By this they meant that for some subcultures in society, a regular illegal career was available. For example, Dick Hobbs' after interviewing many successful professional criminals and demonstrated how it was possible to have a career in crime given the right connections and qualities. Adding to this is the information in item A by Bourgois which describes how inner city youths were drawn to crime due to their belief in the American dream and the booming, multibillion dollar drug economy. Cloward and Ohlin described the three subcultures present in the illegal opportunity structure, criminal which is where young offenders work their way up the hierarchy, conflict where groups are brought up and turn to violence in this environment, and retreatist where the individual has no opportunity to engage in either of the other two. ...read more.

This led to status frustration, a sense of personal failure and inadequacy, and in an attempt to gain status; they invert traditional middle class values by behaving badly and engaging in a variety of antisocial behaviours. However, Cohen was also criticised often due to it being suggested that lower class children wouldn't know what middle class values were, let alone know how to invert them, as well as failing to prove that school was the key place to achieve success and failure is demonstrated. In conclusion, strain theory to some extent is still apparent in society, although it has been watered down due to the criticisms that have occurred over time. Bourgois' description of subcultures in item A show that the writings of Merton, Cloward and Ohlin are not outdated and that in some circumstances the proof of strain theory is still very obvious. ...read more.