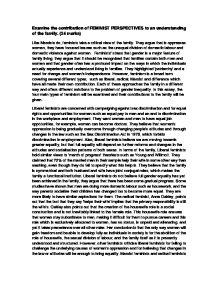 Examine the contribution of feminist perspectives to an understanding of the family.

Examine the contribution of FEMINIST PERSPECTIVES to an understanding of the family. (24 marks) Like Marxists do, feminists take a critical view of the family. They argue that is oppresses women, they have focused issures such as the unequal division of domestic labour and domestic violence against women. Feminists' stress that gender is a major feature of family living, they argue that it should be recognised that families contain both men and women and that gender often has a profound impact on the ways in which the individuals actually experience and understand living in families. They highlighted 'patriarchy' and a need for change and women's independence. However, feminism is a broad term covering several different types, such as liberal, radical, Marxist and difference which have all made their own contribution. Each of these approaches the family in a different way and offers different solutions to the problem of gender inequality. In this essay, the four main types of feminism will be examined and their contributions to the family will be given. Liberal feminists are concerned with campaigning against sex discrimination and for equal rights and opportunities for women such as equal pay to men and an end to discrimination in the workplace and employment. ...read more.

However, radical feminists fail to recognise that women's position has improved considerably - with better access to divorce, better job opportunities, control over their own fertility, and the ability to choose whether to marry or cohabit. Somerville also argues that separtism is unlikely to work, heterosexual attraction makes it unlikely that the conventional nuclear family will disappear. However, Somerville does recognis that women have yet to achieve full equality. She argues that there is a need for family friendly policies, such as more flexible working, to promote greater equality between the partners. Marxist feminists argue that the main cause of women's oppression in the family is not men, but capitalism. Women's oppression performs several functions for capitalism; women reproduce the labour force through their unpaid domestic labour, by socialising the next generation of workers and maintaining the current one, women absorb anger that would otherwise be directed at capitalism, and women are a 'reserve army'of cheap labour that can be taken on when extra workers are needed, when no longer needed, employers can 'let them go' to return to their primary role as unpaid domestic labour. Margaret Benston, a Marxist feminist, states that the amount of unpaid labour performed by women is very profitable to those who own the means of production. ...read more.

Because it is isolated there is less chance of ambition or wanting to get out because they acknowledge that they are still going to have the dual burden even if they did work. A positive point of being home is that psychological happiness of a tidy home, home cooked meals, and the husband goes out to work fresh everyday. However, the fact that your house may be the cleanest on the street or the lawn is mowed everyday serves no purpose because domestic labour gains no recognition from others. In answer to the question, it can be seen that the feminist theory has provided a lot of insight to our understanding of the family, but because it holds such a narrow view of the family, it cannot be considered highly when talking about the family because their are many modern families that are not the traditional nuclear family, as suggested in difference feminism. Feminism have analysed the functions of the family in relation to the wider society. The feminist approach does not look at the family through rose-tinted glasses as it addresses problems such as domestic violence. It has helped to successfully deal with the apparant diversity of contemporary family structures. ...read more.