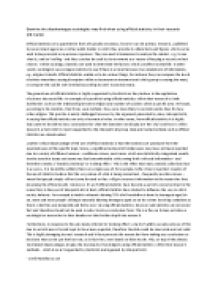 ﻿Examine the disadvantages sociologists may find when using official statistics in their research (20 marks) Official statistics are a quantitative form of typically secondary, however can be primary research, published by Government agencies or other public bodies in which they provide & collate facts and figures which can be used to keep records on a person or persons. They are used in businesses to analyse the market - e.g. to see what is, and isn?t selling - and they can also be used by Governments as a means of keeping a record on their citizens. Within sociology, statistics are used to determine the factors which can affect normal life. In other words, sociologists can compare statistics to see if there is a trend between two related sets of information, e.g. ...read more.

In other sense, from official statistics it is highly inaccurate to be able to draw conclusions for what the data does not display are the why's and how's within research, a trait which is much supported by the Interpretivist group. Data and numerical data such as official statistics are closed ended. Another critical disadvantage of the use of official statistics is that the statistics are produced from the reported cases of the specific topic, hence, a significant amount of similar cases may have not been reported due to a variety of different reasons - confidence issues, most cases which are statistically categorised usually involve sensitive issues and some may feel uncomfortable with coming forth with said information - and therefore creates a "Statistical Iceberg" or 'Iceberg effect.' ...read more.

This is a flaw as it does not allow a sociologist or researcher to then broaden or take further depth into research. Furthermore, in response to the previously referred to 'Iceberg effect,' a lack of validity can also arise as of this due to not all cases of a said topic to have been reported, therefore the data could be inaccurate and not valid. This is highly damaging to one's research and it then prevents the researcher from making any conclusions or decisions that can be put forth as true, as in fact they were based on false results. This, on top of the already mentioned disadvantages, display the drawbacks of sociologists using official statistics within their research methods - which is an act supported by Positivists and opposed by Interpretivists. - Amrik Randhawa 12E ...read more.