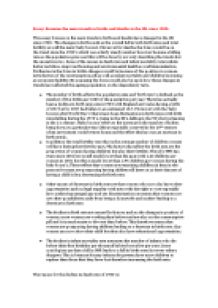 Examine the main trends in births and deaths in the UK since 1900.

﻿Essay: Examine the main trends in births and deaths in the UK since 1900. This essay focuses on the main trends in births and deaths have changed in the UK since 1900. The changes in births such as the overall fall in both birth rates and total fertility as well the main ?baby booms?. Moreover for deaths, the focus would be on the trend since the 1900?s which was a fairly steady number however became a falling rate as the population grew and this will be done by not only describing the trends but the causations too. Some of the causes in death rate and infant mortality rate include better nutrition, improved housing and environmental health as well immunization. Furthermore the focus in births changes would be because of the position in women, introduction of the contraception pill as well as infant mortality and children becoming an economic liability. By assessing the focus would also be upon how these changes in trends have affected the ageing population on the dependency ratio. 1. The number of births affects the population size and ?birth rate? is defined as the number of live births per 1000 of the population per year. There has actually been a decline in birth rates since 1900 with England and wales having a birth of 28.7 but by 2007 had fallen to an estimated 10.7. ...read more.

2. Other causes of decrease of birth rates could have been due to higher incomes and better knowledge of the diseases. Furthermore class and gender differences was also taken into account as if your were from a greater back round/ class it was assumed you would live longer and If you were a female then you would also live longer compared to your male partner. 3. Also other social measures lead the death rate to a decline such as decline of more dangerous manual occupations liking mining and with smaller families this reduced transmission of infection. 1. Furthermore this meant that the life expectancy had increased but taking this all into consideration, the ageing population was now affected as well as the dependency ratio which meant that adults were liver up to much longer and for each pensioner there had to be a worker who would work for this and since this was now increasing the dependency ratio was also increasing too. One main cause of this could be that improved health services therefore people are living to an older age and not dying early. 1. In conclusion the birth rates and total fertility rates have declined but there have been fluctuations on the past but the death rates have also declined which means more people are now living much longer hence the life expectancy has increased. Overall the main causes of increased populations are births and immigration but factors causing decrease in population are because of deaths and emigration. ...read more.