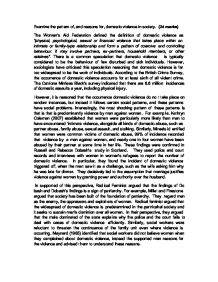 Examine the pattern of, and reasons for, domestic violence in society.

Examine the pattern of, and reasons for, domestic violence in society. (24 marks) The Women's Aid Federation defined the definition of domestic violence as "physical, psychological, sexual or financial violence that takes place within an intimate or family-type relationship and form a pattern of coercive and controlling behaviour. It may involve partners, ex-partners, household members, or other relatives". There is a common speculation that domestic violence is typically considered to be the behaviour of few disturbed and sick individuals. However, sociologists have criticised this speculation reasoning that domestic violence is far too widespread to be the work of individuals. According to the British Crime Survey, the occurrence of domestic violence accounts for at least sixth of all violent crime. The Catriona Mirrlees Black's survey indicated that there are 6.6 million incidences of domestic assaults a year, including physical injury. However, it is reasoned that the occurrence domestic violence do not take place on random instances, but instead it follows certain social patterns, and these patterns have social problems. Interestingly, the most shocking pattern of these patterns is that is that is predominantly violence by men against women. ...read more.

However, Faith Elliot does not agree with the radical feminist claim that all men benefit from women through domestic violence. She disputed that a reasonably large proportion of male are aggressive, and oppose to the concept of domestic violence. The Radical feminists seem to be dogmatic, as they somehow refuse to accept that women also commit domestic abuse. Unknowingly, they fail to acknowledge female violence, including child abuse by women, violence against male partners. For example, Mirrles-Black found that one in seven men has been assaulted. On the other hand, Marxist argued that cases of domestic violence were as a result of the capitalist system. Due to the exploitation and alienation of the proletariat, them seek avenges by dominating. For example, Frank Ashley describes the wives as 'takers of shit' who soak of the frustration their husband feel because of the exploitation they suffer at work. Marxist believed that this explains male domestic violence against men. However, the Marxists were wrong to assume that domestic violence was associated to the exploitation of working class. They ignored the increasing numbers of middle class women who are victims of domestic abuse, as an economic strain brings violence into households. ...read more.

A final aspect of this ideological control is the division of the society into private and public. Somehow, violence against female partners is different from violence against a stranger. It somehow seems that state intervention is less necessary, when the individual's case it concerned with family affairs. However, sociologists have identified other patterns of domestic violence in addition to male's violence against men. According to Mirrlees-Black there are other social groups are at greater risk of domestic abuse. These include, children and young people, those in the lowest social classes, those living in rented accommodations those on low incomes or those with high levels of alcohol consumption, and illegal drugs. To extend on these findings, Richards Wilkinson argued that domestic violence as a results of stress of family members caused by social stratification. This is because families lacking material or financial necessities cause unstable and uncaring relationships. This means that they are predisposed to an increased risk of domestic abuse. For example, worries about money may contribute to domestic conflict as tempers frayed. This indicates that not all people are equally in danger of suffering from domestic violence, and it shows that social stratification can cause stress and trigger conflict and violence in families. However, unlike Radical Feminist, Wilkinson fails to explain reasons to why women are victims of domestic violence. ...read more.