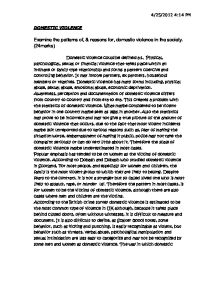 Examine the patterns of, &amp; reasons for, domestic violence in the society.

violence, -They feel they may not be taken seriously, -They are afraid of the repercussions, -Abusive patterns can tend to be seen as normal by the victim having lived with it for a length of time, -Also the way in which they were nurtured(brought up) may be a vital factor. If they observed domestic violence with their parents they may feel that it is normal or okay. All these factors make the statistics show a false picture, as in most cases they are an underestimate of the actual amount of domestic violence. However it is clear the pattern of domestic violence is towards women as the victims and men as the offenders. There could be several reasons for domestic violence, Firstly, Social stress could cause domestic violence. Stress maybe increased when a person is living in a family situation with increased pressures. Social stresses due to inadequate finances or other such problems in a family may further increase tensions. Violence is not always caused by stress, but may be one way that some people respond/deal with stress. Secondly, domestic violence maybe a way in which the man/woman is trying to attain power and control over the partner. ...read more.

A Freudian concept, 'repetition compulsion', has been cited as a possible cause of a woman who was abused in childhood seeking an abusive man(or vice versa), theoretically as a misguided way to 'master' their traumatic experience. Also gender roles and expectations can and do play a role in abusive situations. In conclusion, Understanding the patterns and reasons of domestic violence in a society is very important as we could determine ways to reduce it. Women in most cases are the victims. Domestic violence is clearly a major issue and should be considered illegal in order to reduce it. Awareness of domestic violence as a crime should be made more clear. Laws should be put in place to reduce it and the police could be trained to deal with such situations. Vicarious reinforcement is whereby we learn behavior by observing the consequences of the actions of others. Therefore if domestic violence is clearly set out as a crime and offenders are prosecuted accordingly, this could be a vital step reducing the cycle of abuse, whereby the children observe violent behavior among parents, and the parents getting reinforced accordingly, this would discourage them from doing the same. Help should be easily accessible for all victims regardless of gender or race. All this is vital in reducing domestic violence in a society. ?? ?? ?? ?? 09/10/2010 16:19 09/10/2010 16:19 09/10/2010 16:19 ...read more.