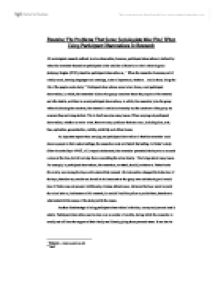 Also, there is no guarantee the researcher will remain completely objective, when recording results they may be subjective to their own view on the subject and not give an objective viewpoint. Furthermore, in the group, several things will be happening at the same time, which makes it difficult for the researcher to observe everyone at the group at the same time. This then can led to problems such as the researcher wont be able to record everything they have seen, and if they don't, then they could miss significant evidence, which may be important to their study. 'The researcher may find they have become so involved in their participation they cease to accurately record data.'4 (Throll 2005) Gaining entrance into the group provides many problems also. In terms of gender, one sex cannot study certain topics, such as a male sociologist cannot change gender to female in order to observe a group of nuns. Also, when observing youths, it is usually doubtful to use a grown researcher, the researcher would have to be of similar age to the youths, in which they may not be qualified enough. Lastly, in accessing the group, there are problems. ...read more.

It's lack of replicability, affects the reliability of results, the risks involved can be dangerous as illustrated by Harlambos Chicago study, while also affecting the researchers personal lives as they have to sacrifice important aspects such as family and friend contact and lead a, 'double life', giving up their own time and money, in which the results may not even be accurate. Furthermore, results cannot be generalised, so therefore how exactly does the results help society, if the results can only be put into affect when talking about just that one study. Besides, when using covert observations, you are, 'infringing on basic human rights' (Tony Bilton 2003),7, by invading the groups privacy. What right has the researcher got to lie to the group and its members just for their study? Zeiller (1956), states that, 'The researchers decision to use the sociological method of participant observations is not always a wise one. In the end, the researcher must ask themselves if the means really do justify the means, or would the study demonstrate more valid results if another primary sociological method was used?" 1 Website: - www.s-cool.co.uk 2 'Ibid' 3 Sociology In Focus, Michael Harlambos, John Richardson, Paul Taylor, Alan Yeo 4 http://www.sociology.org.uk/ 5 Research Methods In Sociology" - Jack Lumley, 2001 6 Sociology In Focus, Michael Harlambos, John Richardson, Paul Taylor, Alan Yeo 7 www.soci.canterbury.ac.nz/resources/glossary ...read more.