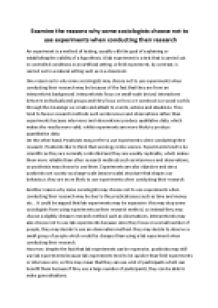 ﻿Examine the reasons why some sociologists choose not to use experiments when conducting their research An experiment is a method of testing, usually with the goal of explaining or establishing the validity of a hypothesis. A lab experiment is a test that is carried out in controlled conditions in an artificial setting. A field experiment, by contrast, is carried out in a natural setting such as in a classroom. One reason as to why some sociologists may choose not to use experiments when conducting their research may be because of the fact that they are from an interpretivist background. Interpretivists focus on small-scale (micro) interactions between individuals and groups and they focus on how we construct our social worlds through the meanings we create and attach to events, actions and situations. They tend to favour research methods such as interviews and observations rather than experiments because interviews and observations produce qualitative data, which makes the results more valid, whilst experiments are more likely to produce quantitative data. ...read more.

It can be said that field experiments can be cheaper than lab experiments, but they can also be time consuming. Some sociologists may choose not to use field experiments as they may have a limited time period of which they can use to conduct their research- if they did use a field experiment then this may mean that they may not be able to finish their research on time. Also, positivists may decide not use field experiments because they may argue that if they had to replicate a study that they did, it would take a rather long time for the same or similar event to occur again. For example, if they carried out a study on an event that only takes place on a Saturday, they would have to wait until the following Saturday for them to do the study again. This may be an issue for the research, especially if they have used a lot of participants in their study because there is a possibility of attrition, where participants drop ...read more.