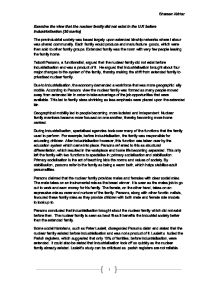 Examine the view that the nuclear family did not exist in the U.K before industrialisation (20 marks)

The male takes on an instrumental role as the bread winner. It is seen as the males job to go out to work and earn money for his family. The female, on the other hand, takes on an expressive role as carer and nurturer of the family. Parsons, along with other functionalists, favoured these family roles as they provide children with both male and female role models to look up to. Parsons concluded that industrialisation brought about the nuclear family which did not exist before then. The nuclear family is seen as best fit as it benefits the industrial society better than the extended family. Some social historians, such as Peter Laslett, disregarded Parsons claim and stated that the nuclear family existed before industrialisation and was not a product of it. Laslett studied the Parish registers, which suggested that only 10% of families, before industrialisation, were extended. ...read more.

Pre-Industrial Family was typically seen as extended family. Links to wider kin helps produce an economic unit where goods were produced. The farther was seen as the head of the household, exercising economic control over his family. Asymmetrical Family was then brought about. The family home and work place became separated. Many males went off to work while females carried out domestic responsibilities. Symmetrical Family was brought about in the twentieth century. This family was quite different from the first two in many respects. Symmetric families are more child-centred and involve greater equality between males and females based upon joint conjugal roles. In conclusion, there is much evidence to suggest that the nuclear family was brought about due to industrialisation. As Parsons suggested, extended family shifted towards nuclear family as the industrial society demanded a workforce which could only be obtained through the nuclear family. There is also evidence to suggest that industrialisation did not completely wipe out the extended family as it still exists in many societies. ?? ?? ?? ?? Shareen Akhtar ...read more.