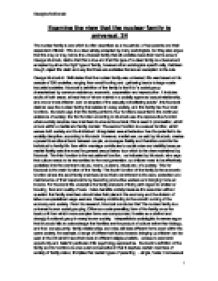 Examine the view that the nuclear family is universal. (24)

Examine the view that the nuclear family is universal. 24 The nuclear family is one which is often described as a household, of two parents and their dependent children. This is a view widely accepted by many sociologists, but they also argue that this may or may not be the universal family that all societies base their norms around. George Murdock, claims that this is true and that this type of nuclear family is universal and accepted by all as the 'right' type of family, however other sociologists specifically, Kathleen Gough, reject this claim and say that there are societies that are an exception to the rule. George Murdock in 1949 stated that the nuclear family was universal, this was based on his sample of 250 societies, ranging from small hunting and gathering bands to large-scale industrial societies. Murdock's definition of the family is that it is "a social group characterised by common residence, economic, cooperation and reproduction. It includes adults of both sexes, at least two of whom maintain a socially approved sexual relationship, and one or more children, own or adopted of the sexually cohabitating adults", this Murdock claimed was the nuclear family that existed in every society, and this family had four main functions. ...read more.

The final way this type of family rejects the claim that the nuclear family is universal is that the husbands and wives did not form an economic unit. Although husbands might give wives token gifts, they were not expected to maintain them, it was even frowned upon if they attempted to. Instead, the economic unit consisted of a number of brother and sisters, sister's children and their daughter's children. The eldest male was the leader of each group of kin. Gough claimed marriage and the family existed in the Nayar society. In order to make this claim, the definition of a family would have to be broadened and would reject the claim of Murdock, that there is one nuclear traditional family that is universal. Gough defined marriage as a relationship between a woman and one or more persons in which a child born to the woman 'is given full birth-status rights' common to normal members of society. Murdock's definition of the family includes at least one adult of each sex. However, both today and in the past, some children have been realised in households that do not contain adults of both sexes, where the household is usually headed by women, in matrifocal families. ...read more.

However, Sidney Callahan (1997) argues such households should still be seen as families. He claims that, if marriage was available, which it is now with the civil partnership Act of 2004, many gay and lesbian couples would marry. Callahan therefore claims gay and lesbian households with children should be regarded as a type of family, at least where the gay or lesbian relationships is intended to be permanent. He concludes "I would argue that gay or lesbian households that consist of intimate communities of mutual support and that display permanent shared commitments to intergrational nurturing share the kinship bonding we observe and name as family" In conclusion whether the family is regarded as universal ultimately depends on the definition of the family. This is seen through the vast majority of variation within families in society and domestic arrangements that are accepted within societies. Diana Gittins (1993) says "Relationships are universal, so is some form of co-residence, of intimacy, sexuality and emotional bonds. But the forms these can take are infinitely variable and can be changes and challenged as well as embraced". From this we can take the view that it may be pointless to define such a diverse institution as the family, as any relationship can reasonably be called a family. ?? ?? ?? ?? Georgina McDonald 1 ...read more.