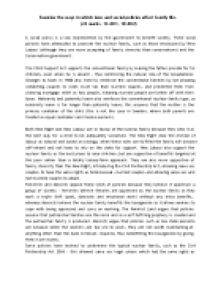 Examine the ways in which laws and social policies affect family life.

﻿Examine the ways in which laws and social policies affect family life. (24 marks, 14 AO1, 10 AO2) A social policy is a law implemented by the government to benefit society. These social policies have attempted to promote the nuclear family, such as those introduced by New Labour (although they are more accepting of family diversity than conservatives) and the Conservative government. The Child Support Act supports the conventional family by making the father provide for his children, even when he is absent - thus reinforcing the natural role of the breadwinner. Changes to taxes in 1988 also tried to reinforce the conventional families by not allowing cohabiting couples to claim more tax than married couples, and prevented them from claiming mortgage relief as two people, meaning married people are better off with their taxes. Maternity and paternity leave also reinforce the conventional nuclear family type, as maternity leave is far longer than paternity leave; this assumes that the mother is the primary caretaker of the child (this is not the case in Sweden, where both parents are treated as equal caretakers and income earners). ...read more.

without any extra benefits, whereas Marxists believe the nuclear family benefits the bourgeoisie as it allows workers to cope with being oppressed and carry on working. The feminist Land argues that policies assume that patriarchal families are the norm and so a self fulfilling prophecy is created and the patriarchal family is produced. Marxists argue that policies such as low state pensions are because when the workers are too old to work, they are not worth maintaining at anything other than the bare minimum required, thus benefitting the bourgeoisie by giving them more money. Some policies have worked to undermine the typical nuclear family, such as the Civil Partnership Act 2004 - this allowed same sex legal unions which had the same rights as marriages (this could also be changed into fully fledged same sex marriage, as the Marriage (Same Sex Couples) Bill is currently in the process of being made a fully fledged law in 2013). ...read more.

Social policies in other cultures, such as those introduced by Nazi Germany in the 1930s, encouraged the traditional nuclear family in the Aryan race while preventing other races from reproducing at all. In China, the One Child Policy introduced in 1979 only one child is allowed per family (apart from foreign families living in China) and if this limit is exceeded then the family is penalised - this too promotes the nuclear family, although a reduced version. It also promotes a male dominated society, as people wanted to pass on their family lineage; girls are often abandoned or kept begrudgingly. Social policies have a very large influence on families, especially in allowing them more diversity; nuclear families are still the norm, but their majority is decreasing, with increases in divorce and remarriage meaning that reconstituted families are becoming more popular, in addition to unmarried couples due to secularisation, and the legalisation of homosexuality meant that same sex couples could form stable relationships and eventually adopt and gain the same rights as married couples, rather than the casual fling culture pre-1970s due to the illegality of their activities. ...read more.

This work aimed to examine the laws & policies impacting on the nuclear family. I thought this was a very good piece of work overall, showcasing the writer