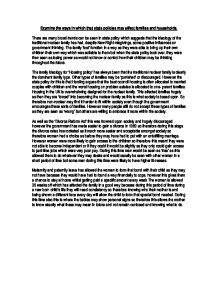 Examine the ways in which that state policies may affect families and households.

Examine the ways in which that state policies may affect families and households. There are many broad trends can be seen in state policy which suggests that the ideology of the traditional nuclear family has had, despite New Right misgivings, some positive influences on government thinking. The family 'lost' function in a way as they were able to bring up their own children their own way which was suitable to them but when the state policy took over, they were then seen as losing power as would not know or control how their children may be thinking throughout the future. The family ideology for 'Housing policy' has always been that the traditional nuclear family is clearly the dominant family type. ...read more.

So therefore non-nuclear may find it harder to fit within society even though the government encourages these sorts of families. However many people still do not accept these types of families as they are seen as 'wrong' but others are willing to embrace it more within the society. As well as the 'Divorce Reform Act' this was frowned upon society and hugely discouraged however the government has made easier to gain a divorce in 1969 so therefore during this stage the divorce rates has rocketed as it much more easier and acceptable amongst society so therefore women had a choice as before they may have had to put with an unfulfilling marriage. ...read more.

because they would have had to found a way financially to cope, however this gives them a chance to stay at home whilst getting paid a specific amount every week The women is allowed 39 weeks off which has affected the family in a good way because during this period of time during a new born child's life they will need consistency so therefore knowing who their mother is and being shown a different face every day will allow the child to form that special bond needed. During this time also this is where the babies may show personal signs so therefore this allows the mother to know exactly what these may mean in future and not remain confused and knowing what to do. ?? ?? ?? ?? ...read more.