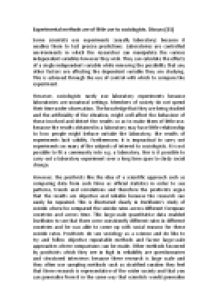 Experimental methods are of little use to sociologists. Discuss

﻿Experimental methods are of little use to sociologists. Discuss (33) Some scientists use experiments (usually laboratory) because it enables them to test precise predictions. Laboratories are controlled environments in which the researcher can manipulate the various independent variables however they wish. They can calculate the effects of a single independent variable while removing the possibility that any other factors are affecting the dependent variable they are studying. This is achieved through the use of control with which to compare the experiment. However, sociologists rarely use laboratory experiments because laboratories are unnatural settings. Members of society do not spend their time under observation. The knowledge that they are being studied and the artificiality of the situation, might well affect the behaviour of those involved and distort the results so as to make them of little use. Because the results obtained in a laboratory may have little relationship to how people might behave outside the laboratory, the results of experiments lack validity. ...read more.

emphasis on the meanings and motives of actors is more important than finding patterns, trends and correlations because it requires an understanding of people?s unobservable subjective states, which cannot be reduced to statistical data. However, Griffin did conduct an experiment where he changed his skin colour to see how people responded to him. Because Interpretivists think that humans are not like plants or animals because they are self-reflexive and have consciousness and attach meanings to behaviour they feel that the best way to research social interaction is through participant observation. Participant observation and unstructured interviews allows the researcher to see the world from the point of view of the people concerned. As Whyte said ?as I sat and listened I learnt the answers to questions I never would of asked.? This shows that the positivist approach puts the researchers boundaries around the research in a way that the Interpretivists try not to do. In addition there methods reveal more about actual behaviour than any positivist approach could, for example, Ditton?s research into bread sales men found that they all stole as a matter of course. ...read more.

Thus in Sissons?s experiment, for example, it was not possible to carry out the two experiments at the same time and the same place, and, since they took place at different times, factors such as the weather and the time of day might have affected the results. Also, in some field experiments, the fact that an experiment is taking place can affect the results. This is often known as the Hawthorne effect. For example Mayo found in his study that variables such as room temperature, the strength of the lighting and the length of breaks were varied, but irrespective of whether working conditions were improved or made worse, productivity usually increase. It appeared that the workers were responding to the knowledge that an experiment was taking place rather than to the variables being manipulated. To avoid the Hawthorne Effect, it is necessary that the subjects of experimental research are unaware that the experiment is taking place. (However, this does raise further problems of informed consent). In conclusion, experimental methods are of little use to sociologists because they are too small scale, the Hawthorne effect occurs and sociologists like to see people in their natural environment. ...read more.