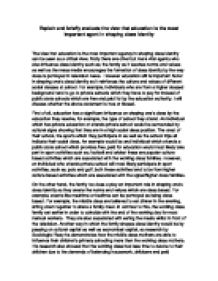 Explain and briefly evaluate the view that education is the most important agent in shaping class identity The idea that education is the most important agency in shaping class identity can be seen as a critical view, firstly there are other but more vital agents who also influence class identity such as; the family as it teaches norms and values as well as the mass media encourages the formation of class identity by the way class is portrayed in television news. However education still is important factor in shaping one's class identity as it reinforces the culture and values of different social classes at school. For example, individuals who are from a higher classed background tend to go to private schools which they have to pay for instead of public state schools which are free and paid for by the education authority. I will discuss whether the above statement is true or biased. First of all, education has a significant influence on shaping one's class by the education they receive, for example, the type of school they attend. ...read more.

For example; events like mealtime or bedtime can be portrayed as being class based. For example, the middle class are believed to eat dinner in the evening, sitting down together to share a family meal. In contrast to this, the working class family eat earlier in order to coincide with the end of the working day for most manual workers. They are also associated with eating the meals whilst in front of the television. Another way in which the family shapes class identity would be by passing on cultural capital as well as economical capital, as research by Sociologist Reay he demonstrates how the middle class mothers are able to influence their children's primary schooling more than the working class mothers. His research also showed that the working class had less time to devote to their children due to the demands of balancing housework, childcare and paid employment but crucially they lacked the confidence and understanding of the school system. ...read more.

An example would be television programme 'This is England '88' depicts the working class as highly aggressive , violent as well as good at playing the social security system, however a different programme 'The Royale Family' illustrates the working class as being mainly based around a front room and watching television. There are different interpretations of the wider range of social classes, e.g. the upper class are seen as well dressed and professional and the working class are seen as scruffy dressed and tempered individuals. To conclude from this I can say that there are other more significant agents of shaping class identity that just education but I would say media and family are the most important. Education is important as it reinforces the culture and values of different social classes but the family provides a basis as they teach you norms and values which has a major impact on your class identity. Overall I consider family to be the most important and education to be third important after the media. ...read more.