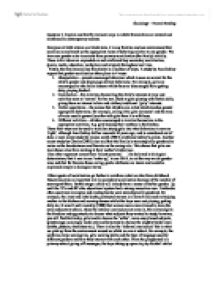 Explain and briefly evaluate ways in which femininities are created and reinforced in contemporary society.

Question 3. Explain and briefly evaluate ways in which femininities are created and reinforced in contemporary society. Everyone at birth is born as a blank slate, it is our families and our environment that socialise us and teach us the appropriate ways of behaving relative to our gender. We learn our gender roles in society from primary socialisation (the family) initially. These initial ideas are expanded on and reinforced buy secondary socialisation, (peers, media, education, workplace and religion) throughout our lives. Firstly, the family socialises femininity in a number of ways. A study by Ann Oakley argues that gender socialisation takes place in 4 ways: 1. Manipulation - parents encourage behaviour which is seen as normal for the child's gender and discourage deviant behaviour. For example, girls are encouraged to take ballet lessons whilst they are discouraged from getting dirty, playing football. 2. Canalisation - this involves channelling the child's interests to toys and activities seen as 'normal' for her sex. Such as girls playing with Barbie dolls, giving them an interest in hair and clothes; traditional 'girly' interests. 3. ...read more.

Our peers are a huge influence on how we should behave. Peer groups can exert pressure so that people accept the dominant norms and values of those of similar age, status and more importantly, gender. We have all heard of 'peer pressure', this is just that, as everyone feels the need to have friends, to be accepted and people tend to like people that are like themselves. So it is all too easy to be socialised by peer groups, especially in school. For girls, peer groups show them what they should and shouldn't be doing. You can see this as groups of young girls all tend to spend a lot of time on the phone together, gossiping, taking about boys, sharing make-up tips. Things that boys of the same age certainly wouldn't be doing! The media all around us gives off messages and the media produces gender-specific consumer products. Even when the product is the same (e.g. deodorant or cars) it is marketed and sold differently to males and females. There are films directed at women (chick flicks) and novels alike (chick lit). ...read more.

can 'see' everyone just above them but they just can't break through the metaphoric ceiling and move up to the top positions in business. This gives off a message that, in business, males are more dominant and women aren't as equal as our 'modern-day equal opportunist's society' likes to boast. In conclusion, there are still traditional gender roles in our society that emphasise the dominance and power of men, encouraging and reinforcing that women should be more passive and domestic. However, there is more awareness today and these roles are forever being challenged, for example, the new 'ladette culture' that has come about recently, where girls and young women are taking on what has traditionally been male behaviour, ladettes involve themselves in binge drinking, casual sex and swearing. Also the 'poxy cupid' where in schools the slightest hint of sexism, is being challenged by fierce female pupils, behaviour designed to scare the teachers and even the most dominant males. Despite this, the roles we are 'taught' are still very powerful and influential because they are socialised into children from birth in the home, then reinforced in wider society, having an impact on their adult roles and personalities. Sociology - Naomi Harding ...read more.