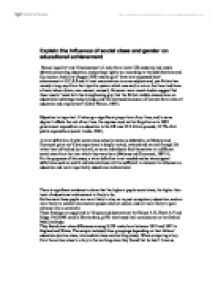 Explain the influence of social class and gender on educational achievement

Explain the influence of social class and gender on educational achievement 'Sexual equality' and 'Classlessness' all echo from recent UK academic and media debates concerning education, and perhaps rightly so: according to the Qualifications and Curriculum Authority (August 2000 results) girls' have now surpassed boys' achievement at G.C.S.E and A level examinations in some subjects and, yes Britain has moved a long way from the tripartite system which was said to mirror the three traditions of male labour (brain, non-manual, manual). However more recent studies suggest that these results 'mask both the strengthening grip that the British middle-classes have on educational advantage and privilege, and the continued exclusion of women from areas of education and employment' (Gaby Weiner, 1997). Education is important. It takes up a significant proportion of our lives, and to some degree it affects the rest of our lives. Its expense must not be forgotten as in 1992 government expenditure on education in the UK was 32.3 billion pounds, 12.7% of all public expenditure (social trends, 1994). A strict definition of what social class actually means is debatable; as Mahony and Zmroczek point out 'Class experience is deeply rooted, retained and carried through life rather than left behind (or below)', as some individuals find themselves in a different social class from that into which they were born (Mahony and Zmroczek, 1997:4). For the purposes of this essay, a strict definition is not needed and so stereotypical definitions such as wealth and shared values will be sufficient to evaluate its influence on education and more importantly educational achievement. There is significant evidence to show that the higher a pupils social class, the higher their level of educational achievement is likely to be. ...read more.

Bourdieu P (1977) takes a Marxist view and has developed his own distinctive cultural explanation for achievement and suggests that there is an element of 'cultural capital' in society. Thus the higher a persons position in the class system, the greater the amount of dominant culture they are likely to have. Culture is regarded generally as superior as those at the top define it as such. Thus it becomes highly saught after and highly valued and consequently it forms the basis of the educational system. Thus because middle class culture is closer to that of the school culture they therefore are more likely to succeed. Evidence of this has already been discussed through Bernsteins studies. Cultural and material factors however according to Heath, Halsey and Ridge (1980) have a neglible affect on attainment once pupils have reached secondary school, as working class students were found to be almost as successful as those from the service class. They conclude that the main difference in attainment was primerly due to the fact that the service class stayed on at education because material aspects permitted. So far explanations have centred on factors over which individuals have little control. Interactionalists argue that we need also to look into the classroom, where it is believed that perspective class differences in educational attainment are socially constructed in the class room. One of the most important views is the way teachers respond to, and make sense of pupils behaviour. Howard Becker (1977) found from interviews with 60 Chicago teachers, that teachers tended to have and share an ideal picture of the ideal pupil: 'highly motivated', 'intelligent' and 'well behaved'. The pupils who fitted into this picture were likely to come from the middle classes and those furthest from were likely to be working class. ...read more.

Some argue that it is not simply a case of removing teachers sexist attitudes, and that classroom interaction is a two-way process. It is not just teacher led. For example French J (1986) argue that pupils bring their own behavior to the classroom and that it was noted that boys from as early as infant school appeared to be more active and mobile compared with girls who were eager to learn and more likely to obey rules, and consequently they demanded more attention because they were more disruptive. French argues that boys become more aware of how to manipulate situations: 'it is not simply because they are boys' but it is partly to do with the way both boys and girls behave and how society conditions this. French continues to argue that 'the most determined action taken within the school cannot effectively counter the influence of peer groups, magazines, television and family' (1986, p406) The arguments put forward to explain gender differences, seem almost obsolete now, and According to the Qualifications and Curriculum Authority (August 2000 results) girls are now surpassing boys in certain subjects at the key 'mile stones' in education. Perhaps the major cause of this is the introduction of single sex schools and the impact of feminism upon the media and politians, never the less as they approach into the labour market, discriminatory practices become more powerful. Furthermore as Dr Gillian Plummer's title of her article (Times, September, 2000) suggests: 'Forget gender, class is still the real divide'. She argues that reports of girls success mask the true picture and that perhaps the only reason for increasing success among girls is among the middle classes and so she challenges the government: 'what action is Labour taking to raise th academic performance of working class girls. ...read more.