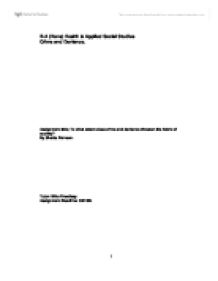 B.A (Hons) Health & Applied Social Studies Crime and Deviance. Assignment title; To what extent does crime and deviance threaten the fabric of society? By Shaida Parveen. Tutor: Mike Kneafsey. Assignment Deadline: 5/01/06. Question title: To what extent does crime and deviance threaten the fabric of society? The essay will attempt to outline to what extent crime and deviance threatens the fabric of society. A crime is defined when a person breaches a law conducting a serious offence, which is punishable by the crown court. Deviance or becoming deviant is all concerned with challenging and breaking rules. Deviance is about being different. The definition of deviant in different areas and in different societies may have different meanings. What may seem deviant in one society may be perfectly normal in another society. In many societies rules are managed and constructed by people who are in positions of social control. In order to identify what is deviant there is need of social control. Social control refers to formal and informal means in which society responds to deviance through the social order. Social control is maintained by social control agents, like teachers and police officers, and can include actions ranging from constructive criticism, open disapproval or arrest. If a person strays from an expected part of the society's norm he is usually seen as deviant. If person is not following the values and the expectations of that society he then is disapproved and punished. ...read more.

According to BCS survey 1995: 33% feared burglary = 6% of all crime, 15% feared mugging, Mugging = 1% of all crime, Crime most feared by all = burglary. Women most fearful of crime especially rape. http://www.sociology.org.uk/carddev.htm The survey showed that 16% of people living in poor housing estate did not go out in the dark because they fear crime. Stories about crime problems frighten individuals. Fear of crime is also linked to other demographic factors such as age, class, gender and ethnicity and most studies suggest that there is an inverse relationship between fear of crime and the actual risk of becoming a victim of crime. Even though many people fear they will still be attracted to read a story of crime and criminals. (Moore, S 2002) Stanley Cohen examines how media interprets crime, and the public perception of crime when highlighted in the media. Cohen focuses on mods and rockers. The media can create moral panic. Stanley Cohen a sociologist in the 1960s used the term 'moral panic'. In the 1960s in Clacton seafront, Cohen saw outcome of 'youth disturbances. The two youth groups, the mod and rockers' ended up fighting on the seafront. The media interpretation of the headline was that they had disturbed peace for other holidaymakers, and portrayed 'people are living in terror as the events unfolded around them. The press had sensationalized the event in newspaper headline that youth violence was out of control. ...read more.

Crime is a popular subject and the media reports crime it grabs headlines, fuels the story in order to make money. The more the story is sensationalized the more the public will buy. The way the media highlighted report of incidents occurring in Clacton, one would believe that youth crime and violence was out of control and that youths were running riot. Shocking stories and biased accounts are more appealing than carefully supported arguments in many cases. It is unfortunate that these stories can leave fear in many people. People are terrified if there area has been highlighted in the press that crime is increasing. Crime focuses on an offence committed by an offender going beyond the personal and into the public sphere, breaking prohibitory rules or law. On the other hand deviance includes violations of norms and constructions of stigma associated with such violations. In some cases crime and deviance are used interchangeably, but in fact such usage does not capture the whole story of each. Crime relates to violations of the law codified by legal code, while deviance could include legal violations as well as social violations like someone talking in a library. People's perceptions of crime and deviance in society overlaps. Therefore sociologists take in consideration that each is invariably linked to the other. In reference to crime and deviance the response of society is varied. Forms of social control is needed to maintain social balance, there is need of accurate statistics when crime is recorded. Media coverage fuels the situation to cause disharmony. This harm disrupts people with fear of crime. ...read more.