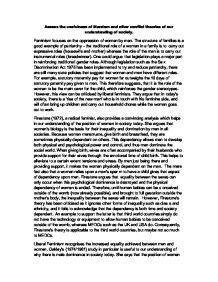 Feminism focuses on the oppression of women by men. The structure of families is a good example of patriarchy -

Assess the usefulness of Marxism and other conflict theories of our understanding of society. Feminism focuses on the oppression of women by men. The structure of families is a good example of patriarchy - the traditional role of a woman in a family is to carry out expressive roles (housewife and mother) whereas the role of the man is to carry out instrumental roles (breadwinner). One could argue that legislation plays a major part in reinforcing traditional gender roles. Although legislation such as the Sex Discrimination Act 1975 has been implemented to try and reduce patriarchy, there are still many state policies that suggest that women and men have different roles. For example, statutory maternity pay for women far outweighs the 10 days of statutory paternity pay given to men. This therefore suggests, that it is the role of the woman to be the main carer for the child, which reinforces the gender stereotypes. However, this view can be criticised by liberal feminists. They argue that in today's society, there is a 'rise of the new man' who is in touch with his feminine side, and will often bring up children and carry out household chores while the woman goes out to work. ...read more.

Therefore, until human babies can be conceived outside of the womb (now already possible), and brought to full gestation outside the mother's body, the inequality between the sexes will remain. However, Firestone's theory has been criticised as it ignores other forms of inequality such as class and ethnicity, and it fails to acknowledge that the dependency is both time and society dependent. An example to support the latter is that third world countries simply do not have the technology or equipment to allow human babies to be conceived outside of the womb, whereas MEDCs such as the UK and USA do. Consequently, Firestone's theory is applicable to the third world countries, but maybe not so much to MEDCs. Liberal Feminism recognises the increased equality achieved between men and women. Oakley's (1974/1981) study in particular is useful to our understanding of why there is male dominance in society today. She says that the position of women varies greatly between societies and over time. Women have always worked, but during the industrial revolution, married women and mothers were taken out of the paid workforce. ...read more.

Firstly, BBC Radio 4 carried out an experiment, which consisted of them putting a made-up job advert in a national newspaper, outlining the qualifications required and the salary (�50,000). There were hardly any women applicants. Two months later, exactly the same advert was put in exactly the same newspaper, but the salary was reduced to �30,000. It was inundated with female applicants. This goes to show that in society it is not necessarily men treating women as of lesser value, hence the reasons for the differences in pay, but because women have low expectations of themselves, and don't apply for jobs with high salaries.. Therefore, it can be argued that the position of women is gradually improving and it is possible for them to reach top jobs. Secondly there is a plethora of women in high paid and well respected positions and this is not a new phenomenon there are cases of albeit rare cases of women in the highest statuses throughout history such as Cleopatra, Boudica, Queen Elizabeth the First, Margaret Thatcher, etc, etc. Despite all the different branches of feminism, they have widened our understanding of patriarchy in society and have provided further reasons rather than just the standard social reasons for the oppression of women. ?? ?? ?? ?? ...read more.