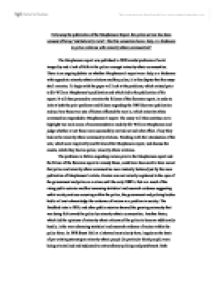 Following the publication of the Macpherson Report, the police service has been accused of being 'institutionally racist'. Has this accusation been a help or a hindrance to police relations with minority ethnic communities?

Such changes as directed by Sir William Macpherson in his report have been shown to have, pushed up the number of racist incidents that are now reported to the police. For example The CPS Racist Incident Monitoring Scheme Annual Report 2001-2002 found a 28.5% increase in the number of racist incidents reported compared to that of the previous years prior to the macpherson report. Sir David Calvert-Smith (2002, Director of public prosecutions) attributed the rise in reported offences to, 'More victims now having the confidence to come forward knowing that the CPS and the police take these offences seriously'. Such a rise in the number of victims of racism coming forward demonstrates that the changes as initiated by the 1999 Macpherson report have in fact helped minority ethnic opinions of the police, as they are now happier to report such crimes. However despite the fact that indeed the reporting of racist crimes has risen, the satisfaction of minority ethnic communities with the police is still markedly lower than that of white communities, indicating that racism still exists and attitudes toward the police have not altered entirely. Dr Andrew Pilkington's overall findings of his research in 2001 indicated that white victims expressed a total satisfaction rating of 65%, whereas black and Asian victims only expressed a satisfaction rating of 41.2% and 38.1% respectively. Also the rate of which these reports are being substantiated is still very low at 2% and of these only about 20% result in either criminal or disciplinary proceedings (G. Smith 2000:6 cited in Reiner, R. ...read more.

T 2003). It is argued that legislation such as the Immigration and Asylum Act 1999 and the Criminal Justice Bill 2002 will disproportionately affect ethnic minorities because of strongly engrained institutional racism (Bourne 2002; Bridges 2001). Also the anti-terrorism act 2001 likewise is argued to be discriminatory, and is perceived to be eroding many basic rights on the grounds of national security. Therefore despite the moves and acts being passed as a result of the Macpherson report the current and ongoing context of what is happening in society and the legislation being used to deal with this, will mean that police relations with ethnic minorities will always be fraught and problematic, even if all of Macpherson's recommendations were carried out. To conclude Macpherson's publication and allegation of institutional racism did help with regards to at least alerting the public and the authorities to a problem. Encouraging positive moves to change such as introducing improvements in the overall handling of racist cases and promoting the recruitment of minority officers. However far more needs to be done in order to regain the minority communities faith in the police force, which was so shattered by the accusation of institutional racism. There needs to be further changes with regards to the organisation of the police, less on the superficial aspects such as just recruitment, more focus on for example promotion and why ethnic minorities are reluctant to enter the police service. Police relations with ethnic minorities will never be fully repaired due to societal factors such as terrorism, immigration etc. But the Macpherson report did help the police relations with minority communities in many ways, but there is far more to be done in order to eradicate what he himself labelled 'institutional racism'. ...read more.