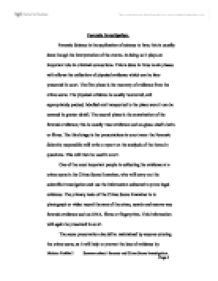 Forensic investigation. Forensic Science is the application of science to law; this is usually done though the interpretation of the events. In doing so it plays an important role in criminal convections. This is done in three main phases with allows the collection of physical evidence which can be later presented in court. The first phase is the recovery of evidence from the crime scene. The physical evidence is usually recovered, and appropriately packed, labelled and transported to the place were it can be examed in greater detail. The second phase is the examination of the forensic evidence; this is usually trace evidence such as glass shad's hairs or fibres. The third stage is the presentations in court were the Forensic Scientist responsible will write a report on the analysis of the items in questions. This will then be used in court. One of the most important people in collecting the evidence at a crime scene is the Crime Scene Examiner, who will carry out the scientific investigation and use the information collected to prove legal evidence. ...read more.

Swabbing and scraping can be used in the collection of blood samples, or collection of dry or wet liquid at the crime scene. Casting is also used for collecting evidence such as footprints and casts of weapon marks. Once the evidence has been collected it must be packed in the correct packaging to prevent damage, loss and contamination of the evidence. The packaging should also be labelled containing information on the description of the item, and exhibit number, reference number, were it was recovered, the time and date and the signature of the Crime Scene Investigator. DNA is one of the most powerful methods of been able to identify a person, who might have been involved in a crime. It is found in nearly all the cells in the body, and contains all the genetic information of that person, with in the nucleus of the cell. As each child inherits a different combination of DNA from the parents then they have a unique combination. ...read more.

act this can include existing precautions and what are the adequate clothing which needs to be worn, step four is the recovery of finding and step five is reviewing of the assessment and revising it. The main health and safety risks at a crime scene are inhalation of toxic products into the respiratory system. Skin contact, were contaminations is cased by contact are absorptions of the substance. Ingestion, injection, viral disease which can be from blood stains wet or dry. The health risks can also be from fuels and lubricants; this includes fluoroelatomers, which is found in engines and transmission systems. This will react with water to produce hydrofluoric acids which is highly toxic. All crime Scenes should be dealt with in the correct manner to prevent the loss of any evidence which may be need later in court. The evidence colleted should be done considering the health and safety of everyone involved. Reference Class note, Graham Thompson, 2005 ?? ?? ?? ?? Melanie Pickthall Summer school: forensic and Crime Scene Investigation. Page 1 ...read more.