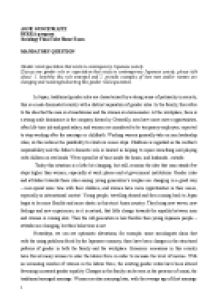 ﻿AGNE GUSCENKAITE BEKKA program Sociology Final Take Home Exam MANDATORY QUESTION Gender role/expectation that exists in contemporary Japanese society Discuss one gender role or expectation that exists in contemporary Japanese society, please talk about: 1. how/why this role emerged and 2. provide examples of how men and/or women are changing and resisting/subverting this gender role/expectation. In Japan, traditional gender roles are characterised by a strong sense of patriarchy in society, this is a male dominated country with a distinct separation of gender roles. In the family, this refers to the idea that the man is a breadwinner and the woman is a homemaker. At the workplace, there is a strong male dominance in the company hierarchy. Generally, men have more career opportunities, often life-time job and good salary, and women are considered to be temporary employers, expected to stop working after the marriage or childbirth. Working women generally take on non leadership roles, so this reduces the possibility to climb on career steps. Childcare is regarded as the mother's responsibility and the father's domestic role is limited in helping to repair something and playing with children on weekends. Wives spend lot of time inside the house, and husbands - outside. Today this situation is a little bit changing, but still, remains the idea that man stands few steps higher than women, especially at work places and at government institutions. Gender roles and attitudes towards these roles among young generation?s couples are changing in a good way ? men spend more time with their children, and women have more opportunities in their career, especially in international context. ...read more.

Research by Sobieraj, 1998 (Children Now, Images of Men and Boys in Advertising, Spring, 2000), found in advertising for toys that these showed boys as "strong, independent, athletic, in control of their environments, adventurous, and aggressive. Girls are shown as giggling, gentle, affectionate, fixated on their physical appearance, and extremely well behaved.â (http://www.directessays.com/viewpaper/79101.html) I have watched some advertisements in TV, and noticed that women in these commercials are more likely to be young, beautiful, dependents, in the home and users of the products. They also are recommending some products without specific explanation how to use it or without the support of factual arguments (Men are better in to weigh in with an argument, I think). Men, on the other hand, are older, often “salarymen”, somewhere outside of the home and authorities on the products. They are also often explaining why the products are good and recommending items soundly. Even though some stereotypes about the presentation of gender in commercials persist (for setting, product type, voice-over), the recent study found an equal number of males and females appearing as primary characters in commercials during prime time. („Changing Gender Roles in Prime-Time Commercials in Malaysia, Japan, Taiwan, and the United Statesâ, Mary Jiang Bresnahan, Yasuhiro Inoue, Wen Ying Liu and Tsukasa Nishida). Talking about gender stereotypes in Japanese media, maybe somebody would talk about women position and how this position is objectified. Of course, Japanese women in past few decades felt discriminated politically and economically. ...read more.

(http://edstrong.blog-city.com/japan_sex_teenage_girls_and_consumerism.htm) Also it is present in other Asian countries, Europe and America. I think, the main problem is that with growing materialism and consumerism enjo kosai is still continuing. These young girls need luxurious and well-known designer’s goods and men - something they receive in change of it. It is like a magic circle, it makes these girls to be involved in this activity for a long time, because it is easy and immediate money. Earning money in this way can be even like a drug, it can create a strong dependency, and once they begin, it is quiet hard to stop later. Some sociologists see enjo kosai as a coming-of-age ritual that has naturally developed in Japan's contemporary capitalist society. Japan is famous for being a place full of contradictions and various sexual politics, which are quiet strange looking with West person’s eyes. In Japan enjo kosai is interpreted in much more easy way - girls lots of times even do not have to have sexual relation with a man, so they do not feel ashamed, and men, are justifying being them involved in this activity because this is the nature who created this „uncontrollable attractionâ, a justification that is not understandable to foreigners. In conclusion, for the girls who offer themselves and the men who pay, enjo kosai is a dangerous drug which consists of two powerful „elementsâ of thought that are deeply rooted in the collective perception of modern Japan – it is the point at which sexual fetish meets consumerism and, unfortunately, they „needâ each other for all the time to make it work. ...read more.