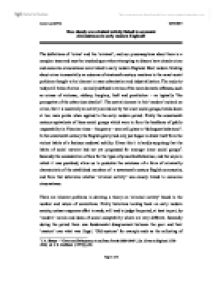 How closely was criminal activity linked to economic circumstances in early modern England?

How closely was criminal activity linked to economic circumstances in early modern England? The definitions of 'crime' and the 'criminal', and our preconceptions about them is a complex issue and must be touched upon when attempting to discern how closely crime and economic circumstance were linked in early modern England. Most modern thinking about crime is essentially an outcome of nineteenth century reactions to the novel social problems thought to be inherent in mass urbanisation and industrialisation. The majority today still think of crime - normally defined in terms of the more dramatic offences, such as crimes of violence, robbery, burglary, theft and prostitution - as typically "the prerogative of the urban slum dweller". The central element in this 'modern' outlook on crime, that it is essentially an activity carried out by the lower social groups, breaks down at two main points when applied to the early modern period. Firstly the seventeenth century equivalents of those social groups which were to form the backbone of public respectability in Victorian times - the gentry - were still given to "delinquent behaviour". In the seventeenth century the English gentry had only just begun to divest itself from the violent habits of a factious medieval nobility. Given this it is hardly surprising that the habits of social restraint had not yet progressed far amongst lower social groups1. Secondly the consideration of how far the types of proscribed behaviour, and the ways in which it was punished, allow us to postulate the existence of a form of criminality characteristic of the established members of a seventeenth century English community, and from that determine whether 'criminal activity' was closely linked to economic circumstance. There are inherent problems in deriving a theory on 'criminal activity' based in the number and nature of convictions. Firstly historians looking back on early modern society, unless a supreme effort is made, will tend to judge the period, at least in part, by 'modern' morals and ideas of social acceptability which are very different. ...read more.

Population increase was arguably the most important factor in this petty crime increase. There were more people around, and a high proportion of them were poor. Even in what passed for good times in the late sixteenth and seventeenth centuries there would never be enough work all year round11. The fluctuations and rhythm of the pre-industrial economy meant that around harvest time there was a high level of employment for a month or so, but in the slacker periods of the agricultural year there would simply not be enough work to warrant extensive employment. In bad times, those who enjoyed at best a marginal economic existence would be thrown into acute poverty12. Harvest failure could send the price of essentials such as bread, the stable food, above the level at which the poor could afford to buy it - resulting in the poor resorting to crimes of necessity such as stealing for food and petty crime. A contemporary observer Sir Thomas Chaloner observed that economic depression "brings more to the gallows in England in one year than a great part of Europe consumeth in many"13. The problems of petty crime and vagrancy therefore can be seen as the products of two interlocking phenomena: the gradual population increase which perhaps doubled the inhabitants in England between 1500 and 1630 and thus created severe long term pressures on resources and produced a large body of the chronically poor; and the tendency in this period for this steady pressure on resources to be punctuated by periods of short, sharp and acute disaster such as when the harvest failed. The willingness of the poor to resort to crime to tide themselves over during periods of crisis is examined by Gaskill. His study of the mentalities of the 'criminals' of the period (as previously stated) comes to the conclusion that this willingness was due in part to necessity and in part to a cultural notion that it was acceptable. ...read more.