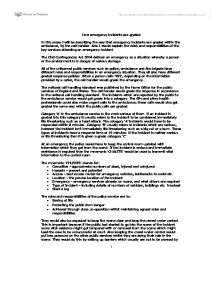 How emergency incidents are graded

How emergency incidents are graded In this essay I will be describing the way that emergency incidents are graded within the ambulance, by the call handler. Also I would explain the roles and responsibilities of the key services attending an emergency incident. The Civil Contingencies Act 2004 defined an emergency as a situation whereby a person or the environment is in danger of serious damage. All of the uniformed public services such as police, ambulance and fire brigade have different roles and responsibilities in an emergency situation. They all also have different graded response policies. When a person calls '999', depending on the information provided by a caller, the call handler would grade the emergency. The national call handling standard was published by the Home Office for the public services of England and Wales. The call hander would grade the response in accordance to the national call handling standard. The incidents which are reported by the public to the ambulance service would get grade into a category. The GPs and other health professionals could also make urgent calls to the ambulance; these calls would also get graded the same way which the public calls are graded. Category 'A' in the ambulance service is the most serious of them. If an incident is graded into this category it usually refers to the incident to be considered immediately life threatening such as a heart attack. ...read more.

The fire brigade would come to the scene prepared for the scene. The fire brigade have many different tools and equipments. This gives them an advantage and makes them ready for any obstacle which they may face when they enter the building to save the casualties. The fire fighters usually help other public services on scene as they have some equipment which the other services don't they would also work with other services in terms of the health and safety. If the ambulance hasn't got to the scene of the emergency and a casualty requires first aid then members of the fire service would have to provide that service. This is important as it could save causalities life. The fire fighters are trained in this section so they know what they are doing. Also they help the ambulance to carry away casualties into the ambulances for them to take to the hospitals. In some cases the fire fighters would be expected to remove any chemicals from buildings. This helps to minimize the risk of the fire spreading and would have to use different types of extinguishers for different types of fires. Using the right type of substance to put out the fires helps to put out the fires quicker and safer. In some instances they would also have to identify what the chemical which they are fighting against. This is then passed onto the police and would help the police to identify how the fire was started. ...read more.

These would be classed as the positive aspects of working with inter-agency cooperation's. The advantages of using Inter-agencies in situations are that the public services wouldn't have much to do apart from play their main roles at the scene. This would put less pressure on the public services meaning that they would be able to do the work which they are required to do very good. Also the skills and quality of work for each of the inter-agencies which is involved would be better than the ones of the public services as they are trained in the profession which they are being called for such as the investigation teams. Another advantage is that support from agencies such as St John's ambulance would help with the causalities. In the London bombings example one of the explosions happened near a doctor training area. This was an advantage as they were able to help the casualties also. The disadvantages of using inter-agencies are that evidence could get ruined because a casualty has to be saved. Also using inter-agencies could result in alot of time being lost and many delays. A main disadvantage in the example of the London bombings is that the doctors going out of the hospital in order to help the casualties outside meant that the patients inside the hospital had to be left unattended and with a slower service inside the hospital. ?? ?? ?? ?? 1 ...read more.