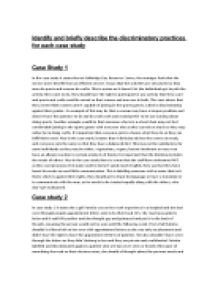 Identify and briefly describe the discriminatory practices for each case study

﻿Identify and briefly describe the discriminatory practices for each case study Case Study 1 In the case study it states that at Ashbridge Day Resource Centre, the manager feels that the service users benefit from an efficient service. It says that the activities are structured so that men do sports and women do crafts. This is sexism as it doesn?t let the individuals get to pick the activity they want to do, they should have the right to participate in any activity that they want and sports and crafts could be mixed so that women and men are in both. This case shows that they centre think women aren?t capable of joining in the sports games, which is discriminating against their gender. An example of this may be that a woman may have a temper problem and doesn?t have the patience to sit and do craft work and would prefer to be out running about doing sports. Another example would be that someone who is in a wheel chair may not feel comfortable joining in the sports games with everyone else as they cant do as much so they may rather be in doing crafts. It?s important that everyone gets to choose what they do so they can fulfil theirs need. ...read more.

Due to this fact the UK has many religions like; Christianity 71.7%, Muslim 3.1%, Hindu 1.1%. Skin 0.6%, Jewish 0.3% and buddhist 0.3%.(social trends) The last practice highlighted in this first source involves equality but how the service users arent being treated as equals. The manager and staff expect the service users to eat the same meals as each other and probably just consider allergies or have plain basic meals to avoid this issue. Im sure being treated like this makes the individuals in the Day centre feel like a number not an individual who can make their own choices. Case study 2 Patricia wont realise what she has done to the patient who has HIV but her action of putting their letter to the bottom of the pile means that the patient wont receive the most efficient treatment that could be provided. She doesnt realise that the patient may not be gay and even if the patient is they may have HIV from another means possibly through sharing needles or they may have been born with the disease or contracted it early on after birth through breast feeding. Sterotypes can exist in society in all forms against people of a certain race, sexuality and age. ...read more.

Due to her lack of experience and knowledge she may compromise a patient?s health slightly because she read the individuals letter assuming that they are gay only with the information that they have HIV. Due to Patricia?s actions this patient could be deprived of necessary medication if the letter was for a checkups? where the doctor is going to re-examine the treatment the patient is receiving. Case study 3 David and the other residents of the unit may feel like they are not being heard because their decisions concerning bedtime are being made for them. It can also embarrass David when he is at the youth centre that the only way for him to take part in the activities upstairs is if he uses the goods lift. This could have a bad effect on this confidence because he could feel like a burden to the residential unit and the youth centre because extra time or plans have to be made around him and the other patients in the residential unit. The youth centre staff may feel terrible that there is no other means for David to go to the upper floor and they may face this problem with future residents. The residential unit staffs is put under more stress because of the daily routines they have to follow which means that they can listen to possible complaints service users may have concerning bed time but can?t do anything to change this. ...read more.