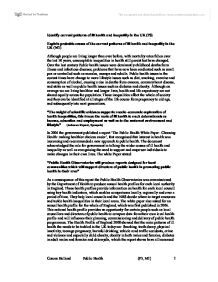 Identify current patterns of ill health and inequality in the UK (P3) Explain probable causes of the current patterns of ill health and inequality in the UK (M1) Although people are living longer than ever before, with mortality rates fallen over the last 50 years, unacceptable inequalities in health still persist but have changed. Over the last century Public health issues were dominantly childhood deaths from illness and infectious diseases, problems that have now been eradicated such as small pox or controlled such as measles, mumps and rubella. Public health issues in the current times have change to more lifestyle issues such as diet, smoking, exercise and consumption of alcohol, causing a rise in deaths from cancers, coronary heart disease, and stoke as well as public health issues such as diabetes and obesity. Although on average we are living healthier and longer lives, health and life expectancy are not shared equally across the population. These inequalities affect the whole of society and they can be identified at all stages of the life course from pregnancy to old age, and subsequently into next generations. "The weight of scientific evidence supports a socio-economic explanation of health inequalities, this traces the roots of ill health to such determinants as income, education and employment as well as to the maternal environment and lifestyle" (Acheson Report, Synopsis) In 2004 the government published a report 'The Public Health White Paper- Choosing Health: making healthier choices easier', that recognised that interest in health was increasing and recommended a new approach to public health. The document acknowledged the role for government in talking the wider causes of ill health and inequality as well as recognising the need to support and empower individuals to make changes in their own lives. The white Paper stated: "Public Health Observatories will produce reports designed for local communities which will support directors of public health in promoting public health in their area" As a consequence of this report the Public Health Observatories was commissioned by the Department of Health to produce annual health profiles for each local authority in England. ...read more.

The levels of teenage pregnancy, smoking in pregnancy and physical activity in children are better than the national average" Both these places are within built up areas close to the city of London. Hackney being a deprived area and Kensington and Chelsea an area with generally a much higher social class. Both these profiles prove that there is a close link between poor health and deprivation also that a child being brought up in poverty is a severe determinant of their health. There are higher rates of ill health in all areas where social deprivation has been identified; this is because of social deprivation causing trends of ill-health. E.g. poverty has been strongly linked to teenage pregnancy, and then that child being more likely to become a teenage mother as well, so it becomes a cycle that is hard to get out of. Education is influenced by the quality of the schooling the children receive and their family socio-economic group. Poverty is strongly linked to poor education, which influences income, housing and a higher chance of unemployment, which in turn is linked to poor health and health inequalities. Being in poverty becomes a trap that is difficult to break free from. Deprivation inequalities explain why there is such a big gap between affluent areas and deprived areas, as deprivation has an unavoidable affect on your health. Homelessness is associated with severe poverty and is a social determinant of health. Homelessness is linked to adverse health education, and social outcomes especially for children. There is a strong link between cigarette smoking and socio-economic groups. Smoking has been identified as the single biggest cause of inequality in death rates between rich and poor in the UK. Smoking accounts for over half of the difference in risk of premature death between social classes. Death rates from tobacco are two to three times higher among disadvantaged social groups than among the better off. ...read more.

Income inequality is related to crime via social cohesion, there are less and less societies and communities working together on the same levels, with people living in the same neighbourhoods being split by social stratification. "People relate closely to their neighbourhoods, and are likely to be healthier when they live in neighbourhoods where there is a sense of pride and belonging, Evidence particularly from the World Health Organisation shows how social cohesion and strong social networks benefit health." (Saving Lives Our Healthier Nation) Harmful drinking is a significant public health problem in the UK, and is associated with a wide range of health problems including brain damage, alcohol poisoning, liver disease, mental ill health, and social problems. There are particular risks associated with drink driving, alcohol consumed in the workplace and drinking during pregnancy. Alcohol related problems contribute to social and health inequalities. Motor vehicle traffic accidents are a major cause of preventable deaths and morbidity particularly in younger age groups. For children and for men mortality rates for motor vehicle traffic accidents are higher in lower socio-economic groups and men are three times more likely to have a motor vehicle traffic accident than women. "Pedestrian death rates for children in social class V are five times higher than for those in social class I, and are higher for boys than girls." (Acheson Report) Some disadvantaged groups, such as children from families without a car, are more likely to make journeys by foot, cross more roads than those who have access to a car and consequently are exposed to higher risks of pedestrian accidents. My research has shown me that there are many patterns and determinants of socio-economic inequalities in health and the chances of living in good health are unequal. The chances are much higher for people in more advantaged circumstances than for those further down the socio-economic ladder. It is your socio-economic position, linked to other factors such as income and area, which in turn are linked to environmental factors such as lifestyle, housing and education, that contribute to determine your overall health outcome. ...read more.