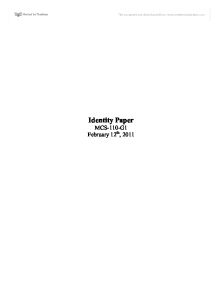 Identity Paper MCS-110-G1 February 12th, 2011 Our thoughts, actions, reactions and beliefs are all shaped based on our surroundings, experience and overall lively hood. The way we were brought up has a huge influence on who we have become and who we will be in the future. Your gender, birth order and social class are all main aspects of what makes you, you. In addition, different religions, culture, etc. that our parents share with us help us create our personality and we continue to pass down their values. In my family I have a household of two very different cultures. On my father's side I've inherited the Lebanese culture. And, on the other side, my mother comes from a huge mix of Polish, Dutch, German and Irish nationalities. My mother was born here, unlike my father who was born in Lebanon and came to this country when he was only 21. My father, Pierre, followed one of his brothers here for a chance to have a better life and to get away from the Civil war and violence in his home country. i He came to this country with very little funds and hoped to make it in this society, just as the original immigrants did. At that time my father knew little to no English at all and has learned it all through conversing with others in America. He was living in an apartment in New Brunswick when he met my mother. ...read more.

I understand how to be there for my friends and family from viewing how my father's family is and how I've become with my brothers and cousins. Religion guides your beliefs, thoughts and behaviors; whether you follow a specific religion or not. In my mother's case, the household she grew up in was less religion influenced. Therefore, when it came down to it she began following my father's religion, Catholicism. I remember listening in on my Teta praying in Arabic, for a good portion of the day. Religion is extremely important to Middle Eastern Cultures. Lebanon has historical buildings and many different holy destinations. Because of the strong religious pull my father had, we would attend church every Sunday, and on other religious occasions. The church we went to was a Lebanese Catholic Maronite Church. Most of the program was in Arabic and around you could see families all sitting together, dressed up in their Sunday's best. Cousins, uncles, aunts and grandparents would all sit together and afterwards there would be drinks, food and snacks in the meeting hall for everyone to interact with each other. In the most recent years we have started to go to church in an American church close by. The program is significantly shorter and the only families that tend to sit together or go together are immediate families. People are less dressed up, and go their separate ways after mass has ended; very different from the Catholic Maronite Church. ...read more.