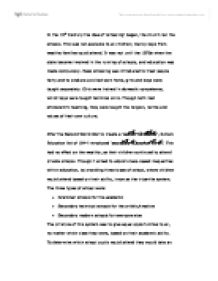 In the 15th Century the idea of 'schooling' began, the church ran the schools

In the 15th Century the idea of 'schooling' began, the church ran the schools. This was not available to all children; mainly boys from wealthy families could attend. It was not until the 1870s when the state became involved in the running of schools, and education was made compulsory. Mass schooling was introduced to treat people fairly and to produce a skilled work force, girls and boys were taught separately. Girls were trained in domestic competence, whilst boys were taught technical skills. Though both had ethnocentric teaching, they were taught the religion, norms and values of their own culture. After the Second World War to create a 'land fit for heroes', Butlers Education Act of 1944 introduced 'secondary education for all'. This had no effect on the wealthy, as their children continued to attend private schools. Though it aimed to abolish class-based inequalities within education, by providing three types of school, where children would attend based on their ability, know as the tripartite system. The three types of school were: * Grammar schools for the academic * Secondary technical schools for the artistic/creative * Secondary modern schools for everyone else The principle of this system was to give equal opportunities to all, no matter which class they were, based on their academic ability. ...read more.

A pupil can also be given a label from their behaviour, such as 'trouble maker' or 'thick', either at home or school. This can damage a child's self esteem or make them rebel, which leads to them believing the label they have been given, this is called the 'Self-fulfilling prophecy. For what ever reason they were given the label, they find it hard to be looked at without the label, so end up behaving in a way that fits to their given label. Working class not only have had inequalities in the past but also still do today. Although there are more opportunities in the education system, home life also plays large impact on how well a child does achidemically at school. Douglas (1964) conducted a study on middle and working class children through primary and secondary school. He found that children of a similar measured ability at age 7 varied a great deal in their educational achievement by the time they were 11. He claimed that the greatest influence on attainment was parental attitudes in the working class. He measured this by the number of times these parents visited the school, family size, early child-rearing practises, health and the quality of the child's school. ...read more.

Many of these children have professional backgrounds, so have good role models and supportive parents and they also have material advantages. Differences in the achievement between gender, race and class will continue to be compared, though surely the person should be treated as an individual. Post-modern thinkers such as Elkind (1998), suggest 'a key characteristic here is the idea of difference and, in a sense, the fragment of identities. In other words, students want to be recognised and treated as unique individuals rather than as groups', (Livesey et al, 2005). Although a students background may effect their achievement, as evidence suggests, it must be remembered that everyone is an individual with their own abilities, no matter what race, class or gender they are, have the potential to achieve in education. A girl, black or white from a working class background may not have had any opportunities for a good career after education 50 years ago, due to inequalities in the system, but this is not the case today. Overall the educational achievements for all groups of people have improved. There will always be some people in all of the groups mentioned previously, that 'fail' in education, as a result of 'self-gratification' and 'now culture', they are more focused on 'living for the moment', and not thinking about how their actions during their education can effect their future life. ...read more.