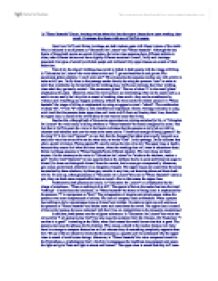 In &quot;Those Bastards&quot; Simon Armitage writes about the fear that upper classes have upon working class revolt. Ccompare this theme with one of Duffy's poems.

In "Those Bastards" Simon Armitage writes about the fear that upper classes have upon working class revolt. Ccompare this theme with one of Duffy's poems. Carol Ann Duffy and Simon Armitage are both modern poets with liberal visions of the world. This is indicated in such poems as "Education for Leisure" and "Those bastards". Although the key theme of those both poems are social divisions, the lower class personas have different attitude to elites, take different actions and have slightly different emotions. Overall, Duffy and Armitage presented two types of socially excluded people and indicated why upper classes are scared of their behaviour. First of all, the idea of working-class revolt is linked in both poems with the image of killing. In "Education for Leisure" the voice states at the end: "I get our bread-knife and go out./The pavements glitter suddenly. I touch your arm". This means that the persona touches you with a knife in order to kill you. Duffy faces in this passage reader directly by using the pronoun "you" in order to show that everybody can be harmed by the working-class. Duffy also indicates that when working-class rebel they get easily excited - "the pavements glitter". ...read more.

The juxtaposition of singular and plural person makes the persona even more disspossesed of society. The lack of company leads to boredom. When a person has nothing to do he concentrates more on himself and is bitter. He starts to made up such stories as the persona in "Those Bastards" and thinks more and more about the revolt. The upper class is scared of the revolt, because they are contented with their lives on contradiction to the lonesome unemployed. In addition, both poems use the religious references. In "Education for Leisure" the voice not only admits "I am giong to play God", but also uses the quotation from the Genesis, Old Testament: "I see that it is good". According to the Bible, when God created the world he saw that this is good. The persona also uses this phrase, but he destroys. This causes a shock in the reader, because not many have he courage to compare themselves to God whereas they do something completely opposite than him. We see with our objective minds that the persona is a psycho and we understand why the upper class is scared of such human beings. ...read more.

In "Education for Leisure" there are 5 stanzas, with the equal number of lines. This is made in order to emphasize the boredom of the voice's life. Again, the boredom leads often to over-confidence and the will to revolt. Duffy states that the lack of job is one of the main causes of the revolt, which is feared by the upper classes. "Those Bastards" is a changed sonnet (for example, the couplet consists of one line). Sonnets usually described love and in this case Armitage uses this form to present the opposite of the love - hate. He wants to show the anger of working-class in a changed sonnet to even more emphasized by contrast lower-class bitterness. Furthermore, both poems are written in the first person. As I have mentioned before, Armitage and Duffy had left-winged opinions, so they make you more sympathetic and involved in the feelings of working class. Others argue that the authors use the dramatic monologue to emphasize the exclusion and loneliness of the character. Those states, as I have pointed out before often lead to the revolt. To conlude, "Those Bastards" and "Education for Leisure" both show a socially excluded person, whose actions araise fear and shock, but they are presented in dissimilar way - tone, structure and techniques, which are used by Duffy and Armitage differ. Marta Szczerba, 10.1 ...read more.