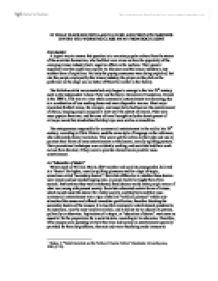 In What Ways Did Popular Culture and People&amp;#146;s Pastimes Divert the Working Class Away From Socialism?

IN WHAT WAYS DID POPULAR CULTURE AND PEOPLE'S PASTIMES DIVERT THE WORKING CLASS AWAY FROM SOCIALISM? Introduction A logical way to answer this question is to examine popular culture from the stance of the socialists themselves, who had their own views on how the popularity of the emerging leisure industry had a negative effect on the workers. Their general argument was that capitalism exploits its labourers and the leisure industry is just another form of capitalism. Not only the paying consumers were being exploited, but also the people employed by the leisure industry; the player on the pitch or the performer on the stage was no better off than the worker in the factory. The British socialist movements had only begun to emerge in the late 19th century, such as the Independent Labour Party and the Social Democratic Foundation, formed in the 1890's. This was at a time when commercial entertainment was booming, due to a combination of less working hours and more disposable income. Most major towns had football teams, for example, and music halls had become the entertainment of choice, keeping people occupied at least until the advent of cinema. ...read more.

In criticizing working conditions, British socialists were typically echoing the writings of Karl Marx, who blamed the oppression of the workers by the capitalist classes for all of societies ills. Keeping with Marxist rhetoric, existing paid-for popular culture offered a type of escapist entertainment from daily lives (The menial, exhausting working day would understandably bring a desire to escape) and working class participants would temporarily forget their background. The entertainment profiteers encouraged a "fa�ade of classlessness" which would "undermine working class solidarity" 3. This was not good for socialism; for a socialist state to emerge, the workers themselves need to take control. Socialism rests on the premise that the proletariat should be aware and proud of their background, and certainly not aspire to join the middle classes, the ones who are expected to be overthrown. It's interesting that the recommended alternatives to commercial entertainment, put foreword by socialists in the late 19th century, were often related to the natural countryside. For example, the "Clarion" (The weekly socialist paper founded in 1891 by Robert and Montague Blatchford and influenced by the ideas of William Morris) soon became a movement with its own hiking, climbing and cycling clubs. ...read more.

never went away and continued to grow in strength through the next century. However, forces existed, of which commercial entertainment was one, which prevented socialism from being as popular as it might have been. As sport and leisure became new fields of investment for entrepreneurs, capitalism became an even bigger part of life for the masses. The money they made from wages was put back into the system via paid-for entertainment. The other reasons that Socialists were unable to win over more of the masses could be linked to the types of leisure activities they put foreword. These activities were physically demanding, as I have already explained, but also they were arguably the type of leisure enjoyed by the middle classes. The unintended result of this was that movements like Blatchford's tended to attract more middle class socialists, and had less appeal to the working classes. Socialists advocated leisure time spent in the countryside; but to travel out of the city every weekend could also have been regarded as the privilege of the middle class. Perhaps socialists needed to start their campaigns from within the towns where the workers lived, not from outside them. ...read more.