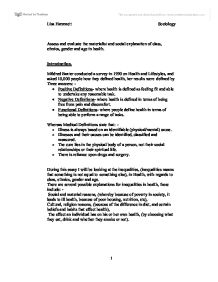 Assess and evaluate the materialist and social explanation of class, ethnics, gender and age in health.

Mildred Baxter conducted a survey in 1990 on Health and Lifestyles, and asked 10,000 people how they defined health, her results were defined by Three answers: -

Whereas Medical Definitions state that: -

During this essay I will be looking at the inequalities, (inequalities means that something is not equal to something else), in Health, with regards to class, ethnics, gender and age.

There are several possible explanations for inequalities in health, these include: -

Social and material reasons, (whereby because of poverty in society, it leads to ill health, because of poor housing, nutrition, etc),

Cultural, religion reasons, (because of the difference in diet, and certain beliefs and habits that effect health),

The effect an individual has on his or her own health, (by choosing what they eat, drink and whether they smoke or not).

We could argue that the standard of healthcare in different social classes are because of geographical reasons, and the level of funding that the government gives to poorer, lower class areas compared to the level that is given to richer, middle/higher class areas.  This can be seen in the Black Report (1980) and The Health Divide (1987).  These reports clearly show such strong evidence of social class inequalities in health that the government tried to suppress the findings.  The Acheson report (1998) then went on to confirm the evidence of social class inequalities and recommend more help for poorer social classes by a means of improving their health.

We can also clearly see from research that lower, poorer classes have a higher mortality rate, (including infant), than the higher classes, these are mainly seen in Respiratory Disease, Injuries and poisoning and Cerebro-vascular Disease, this is because lower classes tend to work mainly in manual work, (factories with dangerous machinery, working in bad weather conditions, etc).

Tudor-Hart (1971), first suggested in the Inverse Care Law, that higher class that need it least gets more resources and lower classes that needs it most gets the least resources, So social class inequalities are made worse by inequalities in the NHS, this is because poorer areas don’t have as many GP practices, they have to depend on public transport, and are more likely to loose pay for taking time off.  Whereas it is thought that the middle/higher classes have the resources to find out what healthcare they are entitled to, and are more likely to fight against poor health services, and are able to jump NHS waiting lists by paying privately.

We can argue that material explanations suggest that those who suffer poor health do not have a healthy balanced diet, inadequate housing conditions, lack of education and joblessness, all stem from poverty, which shows the link between material deprivation and ill-health.

We can argue that poverty and class status in society is not just the reasons for poor health; it also comes down to the individual choices and cultural choices that are made by people in their life.  We are not told we have to smoke or drink or take drugs, we do it because we want to, which we can argue is one of the reasons Respiratory Diseases and Heart disease are on the increase.  We can also argue that another reason why these diseases and other health problems, such as obesity, which is high in lower classes, are on the increase is because of the cheap unhealthy food that is being eaten, and lack of exercise, is also an individual choice.

We can argue that Ethnic groups experience poor levels of health as a result of inequalities in the health service.  A comprehensive survey (The Health of Britain’s Ethnic minorities), was conducted in 1997 by James Nazroo, his findings challenged the view that biology and culture were the main factors that explained the health of ethnic groups in the UK, but instead focused on the importance of socio-economic factors.  The findings found that: - people from black and Indian minorities are more likely to suffer from TB, Diabetes and Heart Disease, people from ethnic minorities are more likely to be hospitalised for mental illnesses, and most ethnic minorities show higher rates of still births, prenatal deaths and infant deaths as well as higher mortality rate. We can see from research conducted by the Health Authority that up to 50% of ethnic minorities described themselves as having poor health.

We could argue that the reasons for this is because of poverty and material deprivation, while racism and discrimination also play an important factor, Minority groups have the lowest income, the worst housing, and the highest unemployment rates in the UK. We can also argue that other cultural reasons such as language barriers, religious reasons and the lack of knowledge of the dietary needs for ethnic minorities, from health professionals may lead to ethnic minorities not seeking medical advice and thus having poorer health.

We can argue that not all ethnic minorities share the same level of inequalities, Black African, Caribbean; ethnic groups are more accepted in society than Asians, Chinese groups make more money than Bangladeshi groups.  We can also argue that it is also down to social class, a middle class ethnic minority doctor is more likely to be accepted than an unemployed lower class ethnic minority.  We can also argue that it also individual choices that lead to inequalities, e.g. social exclusion, a lot of minority do not integrate in the community, instead they stay in groups of their own race.  Ethnic minorities also believe that a strong sense of cultural identity protects against the effects of poverty.

Through research we have found than women on the whole are healthier than men and that women’s mortality rates are lower than that of men.  According to Hilary Graham (2002), men have fewer consultations with GP’s and have lower levels of illness.

We could argue that this is because in society from the time we are born we are taught a “normal” role in society, firstly by our parents and then by schools, media etc, and boys and girls from a young age are given toys, (dolls, cleaning toys etc for girl, tools, cars etc for boys), which gives them a stereotypical role that is expected of them, because of this it is much excepted in society that women can go to the doctors more because they are a weaker sex, where a man is expected to be masculine and except illness.

We could also argue that men mostly work in manual jobs, and that is why they have a higher mortality rate, whereas women take on a more domestic role, looking after the home and children, although we could argue that this is a large reason why women visit the doctors more often than men, according to Ellen Annandale (1998) women who work have better levels of health than those who do not, because of the sense of independence and a wider social network, thus lowering the number of women with depression. It has also been found that women are more like to be living in poverty than men, because for example most single parents are women on a low income.

We can also argue that domestic labour has become easier for women in the home with the development of technology e.g. dishwashers, washing machines etc.

There is also evidence to suggest women are biologically stronger than men, more male babies die than female, and they have a higher biological possibility of living longer.

We can argue that elderly peoples’ opinions of health differ greatly from those of younger people; elderly people accept a range of physical pain and limitations, whereas younger people would define them as symptoms of illness.  We re-evaluate what illness is as we get older and accept greater levels of discomfort as “one of those things”, that comes with age.  Mildred Baxter in her survey of Health found that young people define health in terms of physical fitness, whereas older people defined it in terms of being able to cope with everyday tasks.

We can also argue that the poverty elderly people face also contribute towards ill health, because they cannot afford adequate heating, balanced diet etc, because the live on a low income, or may not know the benefits they are entitled to.

Research has also found that elderly people do not visit the doctor because they see themselves as “wasting time”.

We can argue that inequalities can again occur because of individual choices, it could be argued that a poor diet is not just because of low income but they may live alone and cannot be bothered to cook for themselves.

We also see that social class plays a part, because wealthy elderly people do not face the same inequalities in health as lower class elderly people.

We can also see that the government have taken steps to improve the health of elderly people by introducing the flu vaccine and by giving heating grants etc.

To conclude I think that there are no strong arguments to say that there is one specific social or materialist explanation for inequalities in health.

I think that there are a number of factors that contribute towards inequalities, from geographical, social, financial, cultural, economical, religious reasons, to biological reasons.

I also think that the choices we make as individuals’ plays a major factor towards the inequalities that we encounter in heath, and by changing certain things in our life that we have control over there would be fewer inequalities.