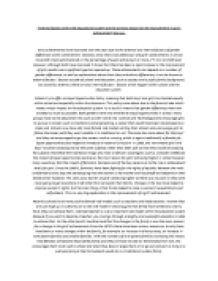 &quot;Internal factors within the educational system are the primary reason for the improvement in girls' achievement&quot; Discuss.

﻿"Internal factors within the educational system are the primary reason for the improvement in girls' achievement" Discuss. Girls achievements have improved over the years due to the external and internal factors of gender differences within achievement. Statistics show that since 1985 boys' and girls' achievements in school have both improved drastically in the percentage of pupils achieving 5 or more A*'s to C at GCSE level. However, although both have improved it shows that there has been a rapid increase in the improvement of girls results and a significant gap has opened up. These achievements can depend on a number of gender differences, as well as explanations about their class and ethnic differences, it can be known as external factors - factors outside of school and education, such as society and a pupils family background, but aswell as external, there are also internal factors - factors which happen within school and the education system. Schools try to offer an Equal Opportunites Policy, meaning that both boys' and girls' are treated equally within school and especially within the classroom. This policy came about due to the feminist idea which made a major impact on the education system. As a result it meant that gender differences were now avoided as much as possible, both genders were now entitiled to equal opportunities in school. ...read more.

A female teacher is a very important role model within the education system because if you want to become a teacher, you must go through a lengthy and successful education in able to achieve that. On the other hand it could be said that the changes in the family is one the main reasons for a change in the girls' achievements Since the 1970's there have been various reasons as to why there have been so many changes within the family, for example: an increase in divorce rates, an increase in lone-parent families and smaller families. With the numbers of lone parent families increasing this means that females will become head of the family and they will have to take on the breadwinner role, this encourages them to do well in school and when they leave it erges them on to go out and earn a living in a well paid job just like the husband would do in a traditional nuclear family. School work has changed quite alot with it now been that most subjects are mainly taken up of coursework and the odd exam, especially at GCSE level. This however favours the girls but disadvantages the boys. Sociologist Steven Gorard (2005) found that the gender gap was quite consistent until 1988-9, at this point then the GCSE was introduced and most subjects turned into coursework and exams, this strongly favoured the girls. ...read more.

This lead girls' into not having ambitions and just following the traditional life, so obviously society had a big part in how they lived their lives and where they wanted to go when leaving school. After weighing up the external and internal factors I personally think that the improvements in girls' achievements have been very dependent on both family background and society but also school life and the education system aswell. Many of the internal factors say that girls' only did better in school because of changes such as the GCSE been brought in and the boys been disciplined more harshly and I agree with those however I do think that girls have achieved all the goals themselves by working hard and studying in school. I also believe that they did this in school because of the role models they had, people who encouraged them to get good paid jobs and to have ambitions and not just be a housewive who is dependent on their husband. Role models such as Margaret Thatcher have led girls into standing up for what they believe in, following their goals and just generally been ambitious. I think without the external factors the internal factors wouldn't be as successful as they are both factors which depend on each other just like a girl will do well in school, if they know they have goals to achieve in the future. ...read more.