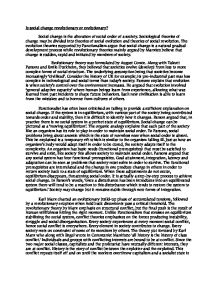 Is social change revolutionary or evolutionary? Social change is the alteration of social order of a society. Sociological theories of change may be divided into theories of social evolution and theories of social revolution. The evolution theories supported by Functionalism argue that social change is a natural gradual development process while revolutionary theories mainly argued by Marxists believe that change is sudden, rapid and initiated by members of society. Evolutionary theory was formulated by August Comte. Along with Talcott Parsons and Emile Durkheim, they believed that societies evolve (develop) from less to more complex forms of social structure. The underlying assumption being that societies become increasingly 'civilized'. Consider the history of UK for example; its pre-industrial past was less complex in technological and social terms than today's society. Parsons explain that evolution is when society's control over the environment increases. He argued that evolution involved 'general adaptive capacity' where human beings learn from experience, allowing what was learned from past incidents to shape future behaviors. Each new civilization is able to learn from the mistakes and to borrow from cultures of others. Functionalist has often been criticized on failing to provide a sufficient explanation on social change. If the system is in equilibrium, with various part of the society being contributed towards order and stability, then it is difficult to identify how it changes. ...read more.

The theory put forward by Karl Marx who along with Engel wrote in Communist Manifesto 'all history is the history of class conflict.' Individuals and groups with conflicting interests are bound to be at conflict. Since the two major social classes, capitalists and the proletariat have mutually different interests, they are at conflict. History is the story of conflict between the exploiter and the exploited. This conflict repeats itself off and on until the workers overthrow capitalism and a socialist state is created. The victory of a new class introduces a new historical period, thus the rise of the bourgeoisie introduced the capitalist epoch. Karl Marx believes that conflict is a normal process and the existing condition in the society will lead to future social change. As a consensus oriented theory, he also highlighted the importance of conflict in social change because it unites people of similar interest to achieve their goals. Continued conflict in this way keeps society dynamic and ever changing. Karl Marx explained social change as a sudden, rapid and initiated by members of society. Marx believed that social change to be a build-up phase of accumulated tension which leads to a revolutionary eruption. Marx argued that 'all history is the history of class conflict'. He classified members of society society into two classes: the exploited and the exploited. ...read more.

But, in the eyes of the Interpretivists, change itself is the starting point and structure is the consequence and is temporary. Interpretivists argue that social change is the creation, negotiation and re-creation of social order. Social change can be understood by looking at change in meanings and definitions. Groups, societies, organizations become real only in so far that the actors believe they are to be real, thus a negotiated consensus about what is real emerges. Society is literally a social construction, an outcome of historical process of interaction and negotiation. If you were president how would you go about creating change in a social context? Like Barrack Obama, President of the United States of America said that,' the change is within you.' Meaning to say, individuals have to first change themselves in order for the process of social change to happen. In conclusion, both evolution and revolution theories explain social change effectively. Evolution emphasizes on stability while revolution emphasizes on conflict and that social change can eliminate social inequality. Both of which are true and applicable to society. Functionalist successfully explain that social change results in new functions of other aspects of society which Marxist provides explanation on the need for change so societies could function more equitably. As Ralf Dahendorf pointed out, both theories are compatible as human societies are stable and long lasting yes still experience conflict. Therefore, social change is the product of both revolution and evolution. ...read more.