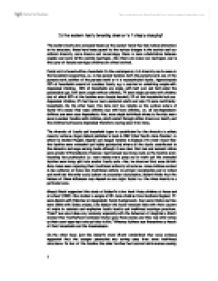 Is the modern family breaking down or is it simply changing?

Is the modern family breaking down or is it simply changing? The modern family also commonly known as the nuclear family has had radical alterations to its structure, these have been caused by the various changes in the society such as: cultural diversity, more divorce and re-marriage, there is more cohabitation between couples and more births outside marriages. Also there are same sex marriages, and in the cases of female marriages children are often involved. Family unit is based within a household. In the contemporary U.K diversity can be seen in the household composition, i.e.: in two parent families, both the parents work, one of the parents work, neither of the parents work or it is reconstituted family. Approximately 23% of households consist of a nuclear family, e.g.: a married or cohabiting couple with dependant children. 28% of households are single, with half over and half under the pensionable age, 28% were couple without children, 7% were single parents with children (out of which 90% of the families were female headed). 3% of the households had non-dependant children, 3% had two or more unrelated adults and only 1% were multi-family households. On the other hand, this data isn't too reliable as the cyclical nature of family life means that many children may still have children, i.e.: all non-dependants children now were once dependents. ...read more.

Mary Chamberlain studied the importance of kinship in the U.K and the Caribbean in her book ' Brothers, Sisters, Uncles and Aunts' (2002). She found that older siblings had a great responsibility in bringing up their younger siblings and cousins. Like Barrow she found that geographical distances made it difficult for the relatives to play the same role in childcare as they would in the Caribbean. Nevertheless many families in the U.K chose to live close by their kin to provide support to a greater extent than is typical of white British families. Essex University conducted a study in 2000 in which they found that 39% of the British born Caribbean adults were married compared to 60% of Whites. Caribbean's were more likely than other groups to intermarry. The study also found that Pakistani and Bangladeshi's are more likely to live in nuclear families. 30%of Asians including Sikhs and East African Asians lived in extended families. It showed that marriage is highly valued with less divorce although there maybe more empty shell marriages. There is little intermarriage with other religions and cultures in Asians. Also they have more children at a younger age and have a strong sense of duty and obligation to extended family. These ethnic cultures add to the diversity of family types found in modern Britain. Over the past few decades' marriage has been becoming less popular. ...read more.

In 1967 the abortion act was passed which ruled it ok to have an abortion within 28weeks of conceiving. During 1980s about 170,000 abortions were taking place P.A, this had increased to 199,000 P.A by 2006. However, teenage conceptions had fallen by 10% between 1998- 2004. Cohabitation between 1979-2001 of 18-49 year old couples increased form 11% to 32%, and in 2002 12% of men and 13% of women aged between 16-65 were cohabiting. A study in 2000 showed that the percentage of the population who believed pre-marital sex was not worth at all rose from 42% in 1984 to 62% in 2000. 67% thought it ok for a couple to live together, 56% thought it a good idea for a couple intending to marry to cohabit first. Nonetheless 59% thought that marriage was still the best option whereas 9% thought there was no point in marriage. All these factors suggest that the contemporary family is neither breaking down nor is it changing, it is merely adjusting and adapting itself to accommodate the contemporary and diverse society and culture. Hence also becoming diverse and flexible. The basic structure of the ideal family is still maintained, i.e.: parent or parents and children with majority of the time the relation of the parent and child being blood related cohabiting. On the other hand family isn't an only based on blood relation any more but on affinity and co-residence. ?? ?? ?? ?? 1 ...read more.